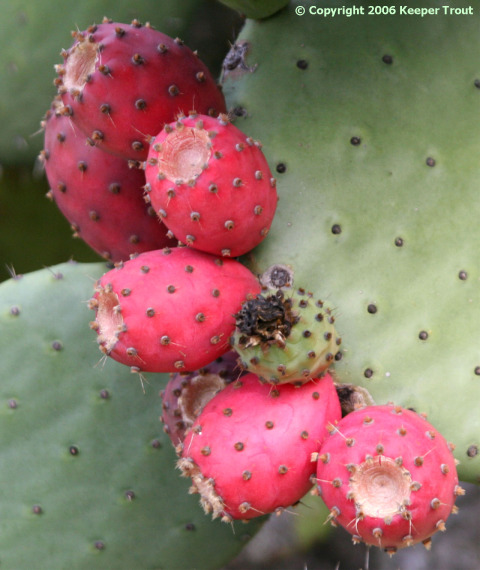 Opuntia is said to be derived from Opus, capital of Locris in ancient Greece (apparently due to some sort of a plant which grew near there) [Note 37].

Some years ago the Opuntias existed as many smaller genera. It was then lumped together into an unwieldy supergenus. It is now subdivided again, largely back into the same genera as before. It would be interesting to somehow be able to total how much time, human labor and resources were wasted by those two sets of name changes. I really feel for the academic & scientific indexing services.

This part of the larger work only includes a few of the Opuntia species. Most are included due to being reported to contain trace amounts of mescaline but the first two owe their inclusion to being erroneously claimed to contain mescaline.

Many more species are discussed in terms of their reported chemistry in Cactus Chemistry By Species (link to the PDF).

A number of Opuntia species are featured in supernatural context in a wide variety of archeological depictions crossing many cultures and years. Most appear to be either small jointed or round jointed. In some cases the small jointed depictions are also distinctly spotted as can also be readily observed in a number of the Tephrocacti which bear dense round clusters of short glochids.

One curious example [Note 33], involving possible enema paraphernalia, shows a male and a female jaguar with clearly dilated pupils, each with four prickly pear pads portrayed on each of the necks of the stirrup vessel above them. A jaguar with dilated pupils is similarly distinctly depicted in the context of San Pedro cactus on a much more intricate stirrup vessel (which has been reproduced numerous places including Schultes & Hofmann’s Plants of the Gods. These vessels were made in molds and assembled. There are at least six distinct variants existing of the jaguar and San Pedro cactus theme with multiple copies being known.

The following image is from the Walters Art Museum.

from the Walters Art Museum

Use of some forms of stirrup vessels for enema administration has not been proven (or even particularly well explored) but it may be pertinent to comment that one of the few depictions that I have encountered which depicts them in actual use,  portrays them as being used for this purpose [Note 34].

Very few Opuntia species have been analyzed. It is an enormous genus in need of phytochemical work. An interesting note was made in the 1949 Chemical Abstracts, when describing the work of Federico Falco and Sebastian Hilburg published in 1946/1947. They examined a number of Argentinean Opuntias. “The presence of alkaloid was demonstrated in every sample.” Clearly this is an area which deserves more attention. 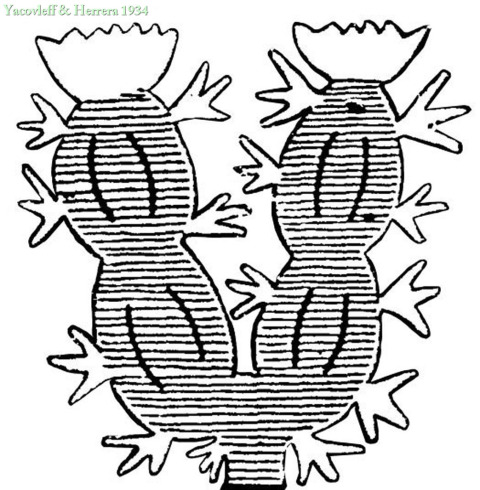 The low mescaline content observed in the Opuntia species to date does not mean they all must be similarly low. Most Trichocereus species lack mescaline entirely and many which do contain it, do so in very low amounts. Even the high mescaline producers sometimes have only low concentrations.

As with  Trichocerei, most Opuntias have not been examined and the majority of plants such as Puna are also presently unexamined. However, a far lower percentage of the existing Opuntioid species have been analyzed compared to Trichocereus. And, only a trivial number of their close relatives, Maihuenopsis, Quiabentia, Pereskiopsis, Pterocactus and Tacinga, have; with trace amounts of mescaline reported in one Pereskiopsis species. 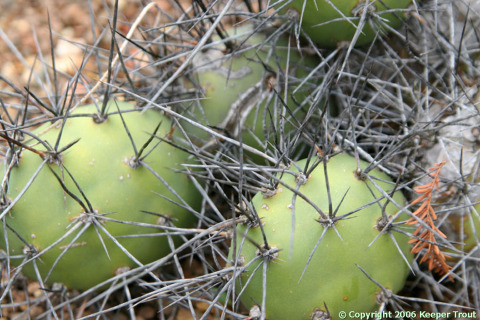