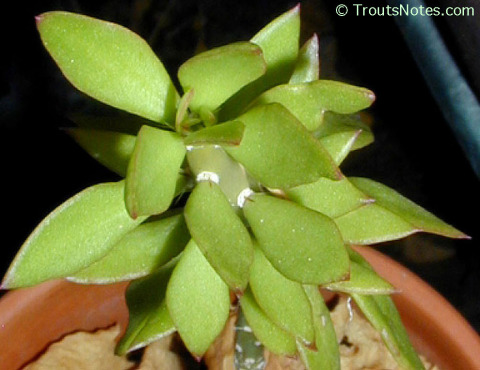 ~10 spp. of trees and shrubs from Mexico and Central America.

They are cacti but have thick leaves which are broad and flat.
And, areoles with glochids.
Yellow to red flowers. Lateral, mostly sessile, rotate. Ovary is
leafy.
Umbilicate fruit has a few bony seeds, covered with matted hairs.
Allied to Opuntias but more similar in habit and foliage to Pereskia.
Hortus Third page. 846

The fruit are Opuntia-like, and those of some Mexican species are said to be eaten by cattle during the dry season. Safford mentions that the hair covered seeds are an easy way to distinguish these from the similar Pereskia. Safford 1908. [Pereskia spp. lack glochids & hair.]

Sometimes this is spelled Peireskiopsis. Many authors use this spelling in spite of its potential conflict with the Code of Nomenclature. Some have claimed that the Code has been specifically amended to allow this. 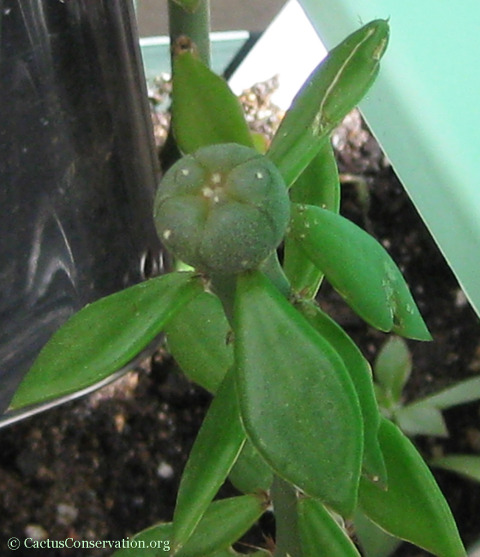 Many growers use Pereskiopsis as grafting stock to graft young seedlings or small cuttings until they get large enough to be regrafted onto a larger sized stock or their own roots. They are also used to decrease the time required for seed production due to their ability to accelerate the growth rate of their scions.

The tiny glochids do require a little care in handling but they are valuable tools for plant propagation & cactus conservation.

My thanks to Cactus Conservation for letting me use these two images! 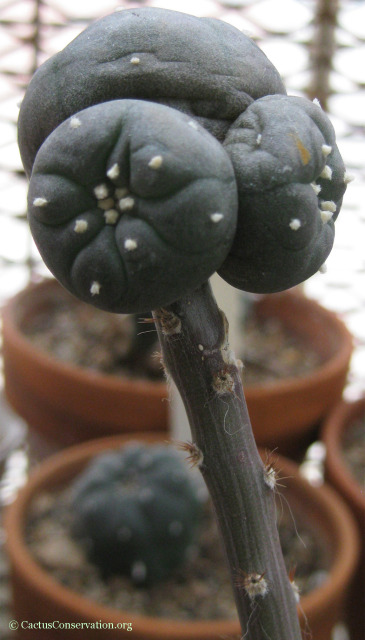 [An image is presently unavailable to me but LOTS of them exist at Google Images under Pereskiopsis kellermanii.]

Etymology: scandens is in reference to its apparent “climbing” habit due to sprawling across shrubbery (“scandent”).
kellermanii was named for botanist William Ashbrook Kellerman who collected the species.

Backeberg 1977: page 408:
Clambering shrub to 10 meter tall. Stems are grey in color, round in cross section and smooth.
Leaves are smooth, tapering and ovate; up to 2 cm in length.
1 short (5 mm) spine is borne from the woolly white areoles.
They bear brown glochids.
Yellow flowers form slender, more or less tubercled, fruit which mature slowly and contain few seeds.

Despite the low value it might be suggested that this and additional species be looked at more closely with an eye to alkaloid concentrations in the plant’s various tissues and possible seasonal fluctuations.