~20 spp. of leafy trees, shrubs and vines occurring through Mexico, West Indies and Central and South America. Some are trunked and upright but many are sprawling. 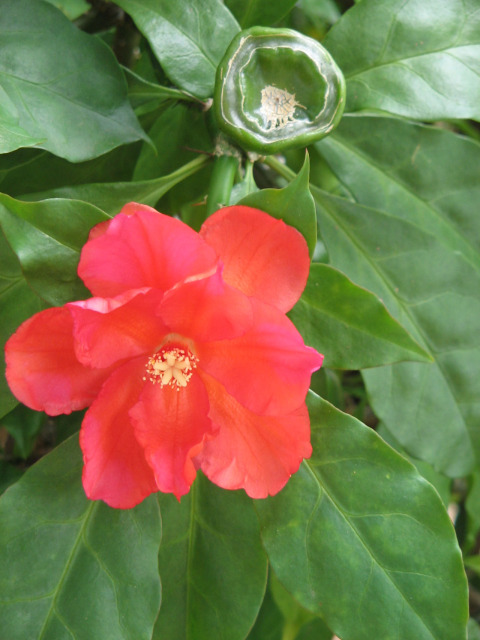 A few species have been in cultivation for many years in warm countries.
Stems are woody and not jointed.
Leaves are alternate, broad and deciduous.
Martin et al. 1971 noted them to only drop their leaves if their temperature in the Fall reaches 40° F. Mine have never exhibited any deciduous behavior in central Texas.
Safford described the glossy leaves as resembling those of lemons.
Areoles spiny but without glochids.
Flowers are stalked solitary or corymbose or panicled, rotate, white or yellow or red. Safford pointed out that the occurrence of clustered or panicled flowers in the Cactaceae is unique to certain species of Pereskia.
Hortus Third: 846

Propagation is by cuttings. Can be raised like a normal cactus but I’ve had better luck treating them like epiphytes. i.e. (similar to orchids but with lower moisture.) Hortus Third: 846

Fruit is said to be apple-shaped (?) and used in the West Indies for sauces and tarts in a manner similar to gooseberries. The seeds are said to be lens shaped and glossy. Safford 1908

Etymology: corrugata is in reference to the wavy leaf margins. bleo means “to flower”, “to bloom” or “a blossom”.

Distribution & occurrence: Of unknown origin. Cutak described P. corrugata based on a specimen in the Missouri Botanical Garden.

Bush or small tree 2.5 meters or taller.
The main trunk is said to have tufts of thin spines.
Stems are grass-green and smooth, later becoming olive-green and shiny.
Spines are sharp, black, of dissimilar lengths, in groups of 3-25 and 5 to 15 mm in length.
Leaves are grass-green, paler underneath and 8-32 cm long and 3-7.5 cm wide.
Backberg 1958: page 118.

Mescaline is not present but this species is noteworthy. 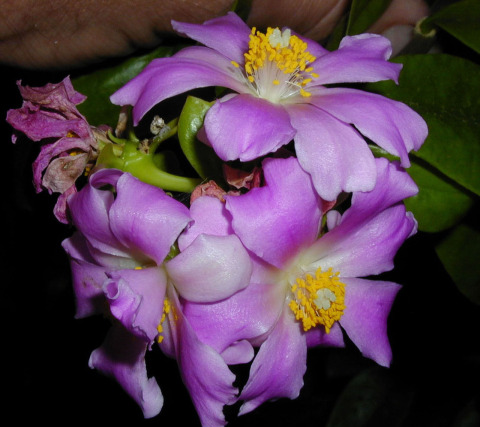 Usually cultivated under the name Pereskia bleo according to Backeberg. Compare his opinion with the assorted declarations of synonymity contained herein. 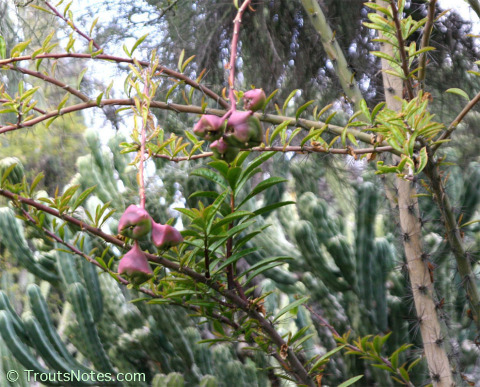 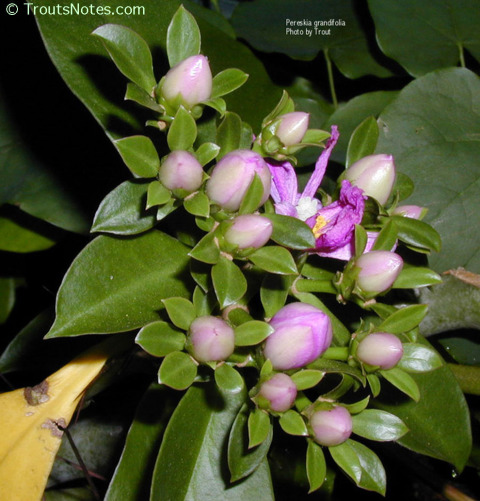 Fruit is pear-shaped with cuneate leaves.
Ed: Perhaps “somewhat pear shaped” would be a better description. Fruit smells wonderful, somewhat like green apples, but tastes bitter, like soap, with a foul after-taste. Seeds are black and very glossy. All fruit remained green when ripe in central Texas and produced very few seeds. 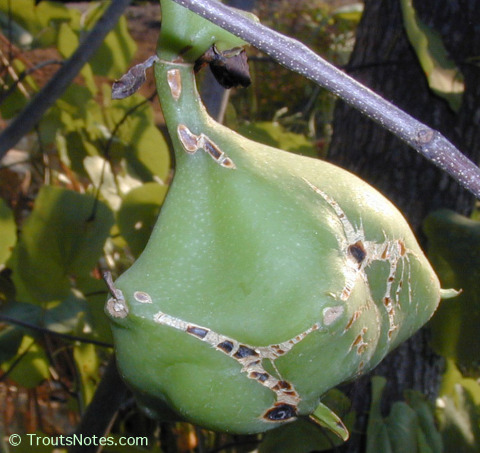 P. grandiflora has thusfar produced seeds for me that were consistently smaller than P. grandifolia but I have examined too few specimens to know if this is a consistent trend. 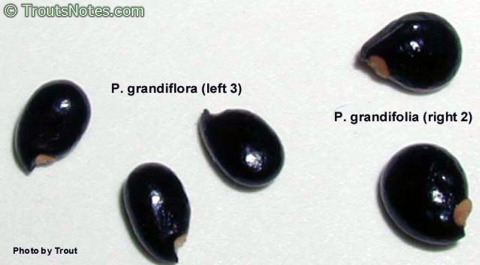 For a nice microphotograph of a druse crystal observed in a Pereskia grandifolia cell, see page 173 in Mauseth 1983a.

For a photograph of a callusing funiculi; grown in tissue culture, see King 1957, page 104. 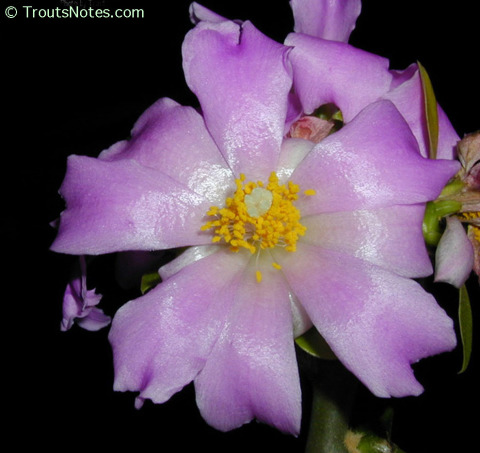 Tyramine was found in both plants, (as well as in 6 other species of Pereskia.) 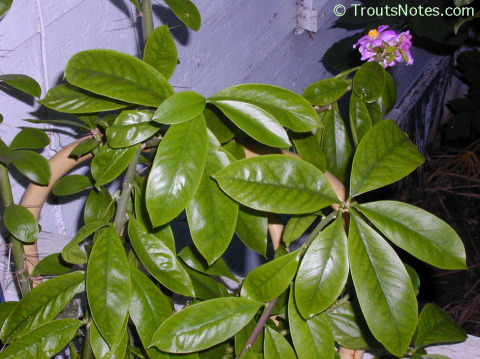 grandiflora – left & back with flower on back right / grandifolia – front right.

Noteworthy also, perhaps, is that all of the mescaline producing Pereskia spp. are considered by Backeberg to be Rhodocacti. Perhaps a hint for future assays?.

Hort. = Hortorum or hortulanorum meaning that it originated as a horticultural offering and that it is not a recognized species.

Mescaline is not present but this plant is noteworthy. 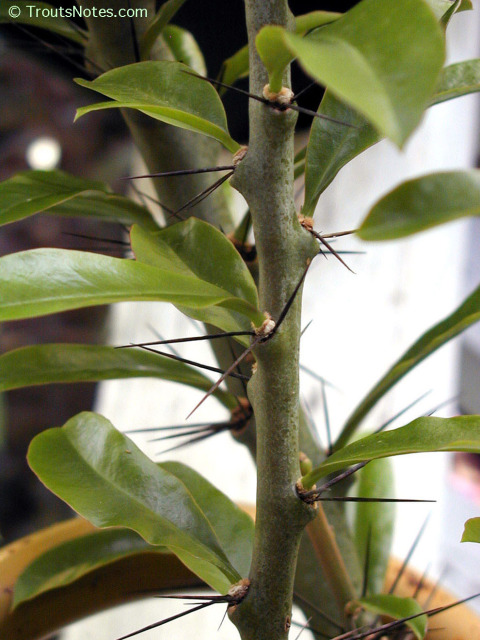 This is a widely and popularly cultivated cactus. 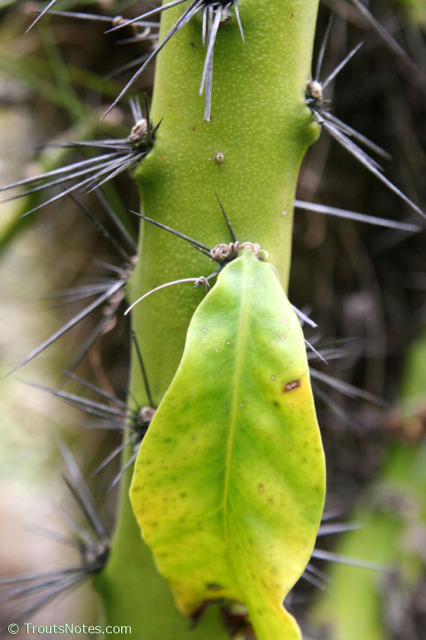 β-Hydroxymescaline has been reported
While it is pharmacologically active, it has been reported inactive as a hallucinogen in animal studies. See under its entry in Sacred Cacti Part C, section 1: the Cactus Alkaloids [link to PDF].

Removal of the β-hydroxy group IS readily possible using simple catalytic hydrogenation but that is obviously not a kitchen countertop procedure for untrained people.

Using tlc, Doetsch et al. 1980 observed but curiously did not quantify β-Hydroxy-Mescaline and Tyramine. Strangely, the novel discovery of β-Hydroxymescaline as a natural compound was not explored any deeper.
Normally McLaughlin’s teams are quite anal analytical chemists who are amazingly rigorous about quantitating and proving the identity of never before isolated cactus alkaloids, even if present in tiny traces.  Or at least, novel alkaloid discoveries usually merit some interest by their discoverers.
While β-Hydroxymescaline has long been known as a synthetic compound; this single report is its only reported occurrence in nature [Note 41].
Their apparent lack of interest in the occurrence of this molecule in this plant seems puzzling to me.

Now considered to be lumped as just another synonym of P. grandifolia. 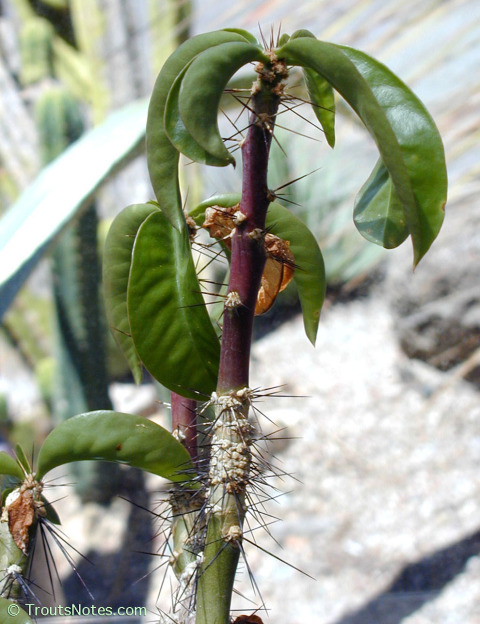 Occurrence & distribution: Found in Tampico, Mexico. Said by Safford 1908 to have “…only been collected on the banks of the Rio Panuco, not far from Tampico, in the northern corner of Veracruz.”
This species evidently was later found to have a wider distribution, or perhaps range of cultivation, as the cover of the 1984 CSJA, volume 56, issue #4, features a painting of this species depicting a specimen found growing at Puerto Vallarta, Jalisco, Mexico (near the village of Los Juntos). 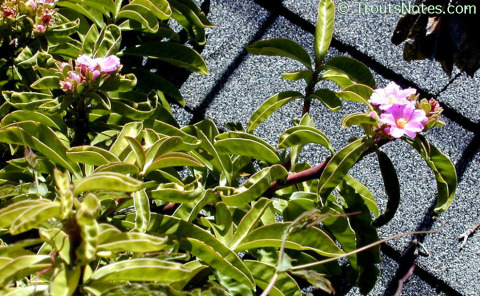 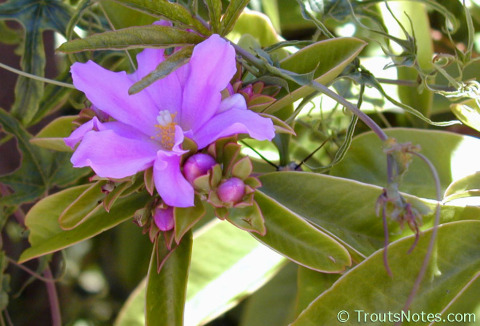 Despite the low values and while it is not clear whether mescaline was actually present in all parts of the plant, it would be worth trying to determine if the deciduous leaves of Pereskia spp. contained mescaline as plants could withstand periodic leaf harvests. Several kilos of dry material is a lot of plant but in tropical or mild temperate zones these plants can get quite large and sprawling with age. They would probably respond very well to thoughtful harvesting, especially if coupled with the rooting of numerous cuttings. These beautiful plants need closer evaluation. [As does the closely related Maihuenia.]
It is not a feasible plant source for any commercial purposes but for an individual or so, in the right climate this subject might prove to be something interesting to study.