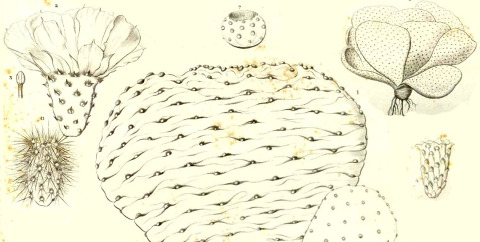 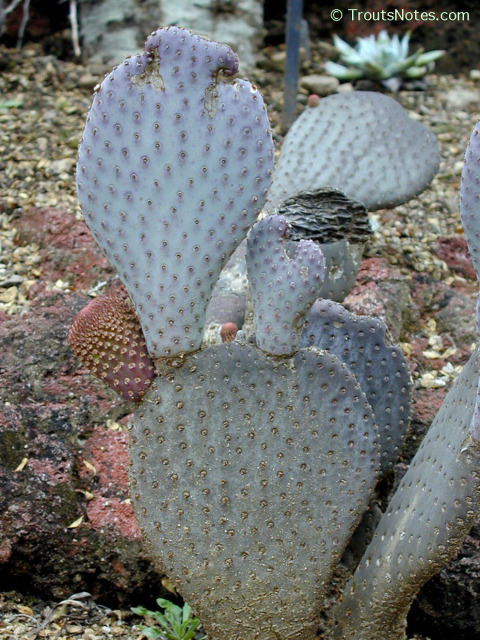 Etymology: In reference to the branching arising from the base.

Occurs in southwestern US and into northern Mexico (Sonora). 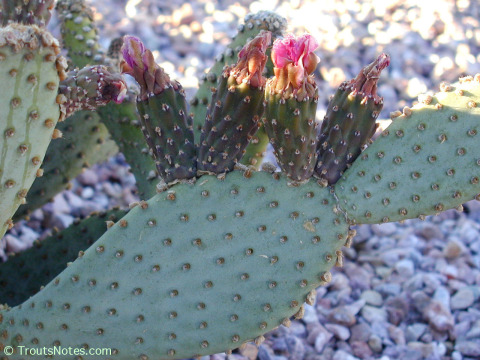 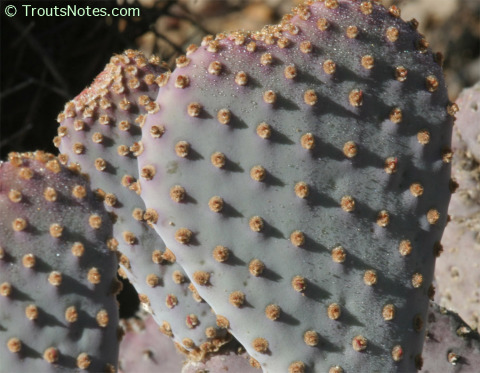 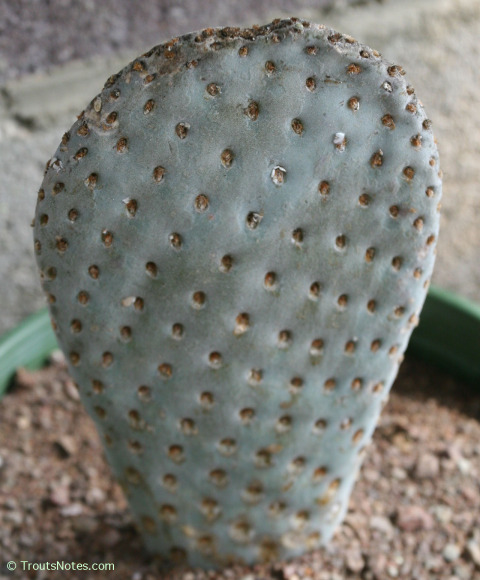 Very striking low growing plants. Usually grayish to bluish green, often reddened around areoles. Almost appearing spineless from a distance due to the clumps of short glochids and laterally wrinkled skin of the pads. A number of varieties exist with varying degrees of spination (some having only short lived glochids and no spines), pad forms, flowers and fruit.

Cerise flowers are most common. Other colors are known in some varieties. Flowering time variable. Usually after it gets warm. Flowers are usually 5 cm in diameter. Fruit is short and oval shaped. Large and thick seeds. 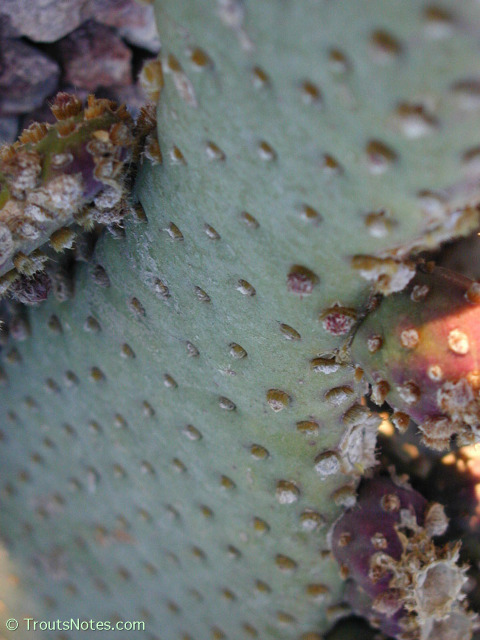 At least one variety, (var. cordata) is a horticultural cultivar.
Stays small and is fairly cold tolerant. Pizzetti 1985. 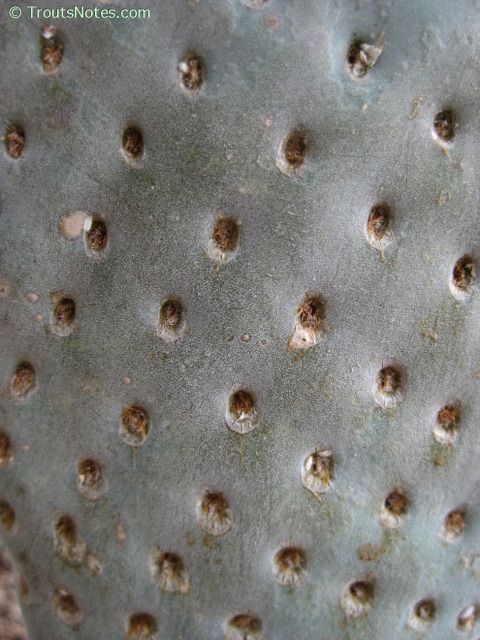 Did you catch the divergence of those plants from what was said in the original description?

tlc did not indicate the presence of any alkaloids.

Tandem mass spectrometry detected mescaline at 0.01% by dry weight and

3,5-Dimethoxyphenethylamine at less than 0.01% dry weight.

It was not noted by Ma and coworkers which variety they analyzed. 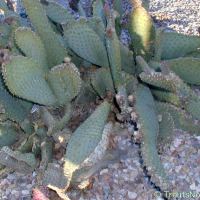 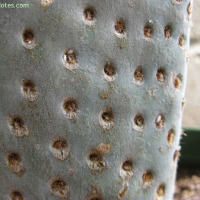 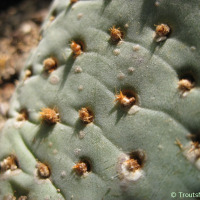 The presence of mescaline was reported. 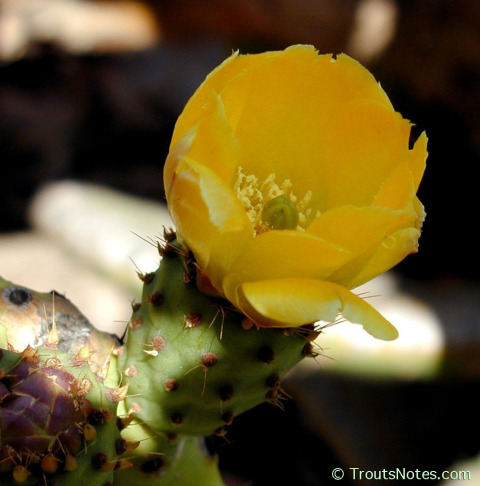 Believed to be tropical America (it is clear that it underwent intensive human development in Mexico). Cultivated widely and occasionally naturalized in the Mediterranean and temperate to tropical regions.

Has widely and commonly (and readily) hybridized with native
Opuntias in southern California but, in US, only common as an escaped plant in Hawaii.

Considered a weedy pest in Australia and parts of Africa where biological warfare in the form of deliberate cochineal and Cactoblastis releases have been employed. 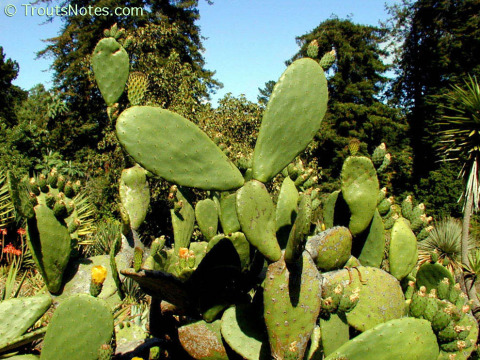 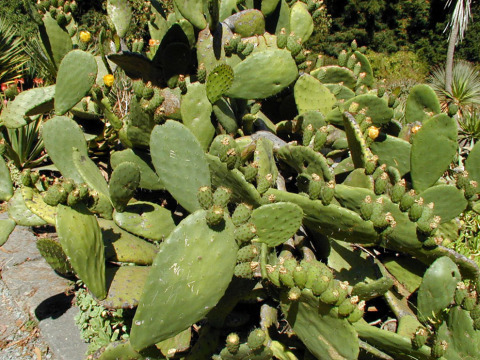 Trunk is woody up to 120 cm long and 120 cm in diameter, and much branched on upper part.

Oval or oblong thick and fleshy pads can reach 16 inches.

Small areoles normally lack spines but possess many yellow glochids which fall off with age.

A spiny type is also known to exist. It has 1-6 white spines [Note
39] per areole that can reach 4 cm but are usually shorter. Shorter spined plants are believed to have developed by Mexican horticulturalists.

Yellow to yellow-orange flowers are large; with pale yellow stamens.

Fruit is “pear-shaped and umbillicate at its apex”. It can be yellow, [pale yellow-green (de Castilla variety)], orange, red, reddish, purplish or striped. The pulp is normally the same color as the epidermis. [Ed.: When striped?]

Widely cultivated. Benson says “prized for their fruit since prehistoric times.” Claimed the best edible cactus fruit [ed.: this might be disputed].

Multiple cultivars exist; some are grown for fruit and some for their edible pads.

“Burbank’s Thornless” is a common and completely thornless type that is popular for food and landscaping. The war that was waged on Burbank by the USDA (and William Safford) over this particular selection bears mention but is outside of the scope of this entry.

[Flath & Takahashi 1976 note the flavor of the de Castilla variety to be mildly sweet and melon-like with little acid character.
They describe its flesh as pale-green and similar in texture to a ripe melon or kiwi. Interestingly they found it to share some volatile C-9 compounds which are also known to occur in cucumbers and certain melons and which are claimed responsible for the character of their flavor.]

A more detailed look at this plant can be found in Cactus Chemistry By Species (link to PDF). 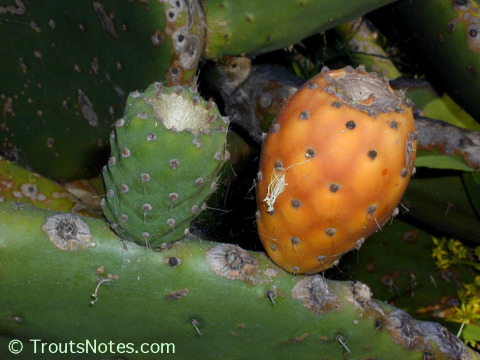 Benson notes that it requires deep soil and some subirrigation in order for it to escape and become a problem. Its entry into the gene pool of the hybrid swarms of southern California was due to the ease of insect cross pollination with other, already weedy, Opuntia species. 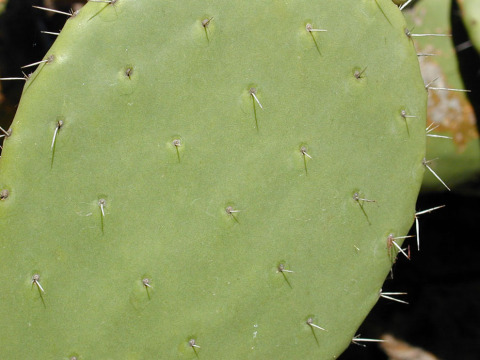 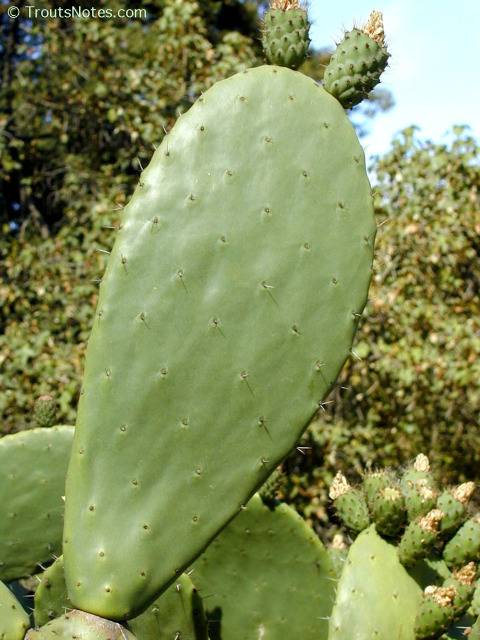 Opuntia ficus-indica has been reported to contain:

El-Moghazy et al. 1982 analyzed Egyptian-grown plants but did not give the percentages recovered.

Isorhamnetin was found in the hydrosylate of flower pigments.
Arcoleo et al. 1961

Indicaxanthin (a betaxanthin) was reported in mature fruit (orange yellow variety) by Impellizzeri & Piattelli 1972. (Also in Piattelli et al. 1964a & 1964b)

Opuntia ficus-indica is widely used for food and is incorporated in many folk remedies (frequently based on the mucilaginous properties of the pulp).

In Bolivia, the pulp is used as a refrigerant and anti-inflammatory for healing intestinal and stomach problems. Parboiled, peeled leaves sprinkled with vinegar or camphorated alcohol is applied as a plaster to treat angina, malignant tumors and kidney pains.

It is said that if the leaf pulp is “abused” it causes diarrhea, lassitude, and weakness in all body parts as well as provoking profound dreams [Note 40]. 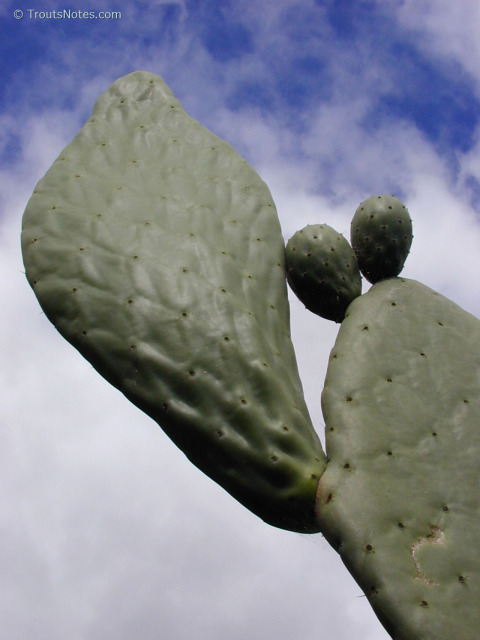 A thirsty Opuntia ficus-indica in Oz