Common names: “chende” and “chente” and “chinoa”. First was included by Pizzetti, first two by García and all three by Britton & Rose. Roland-Gosselin also gave “chende” but added the Nahautl name “cotzonotsehtly“. 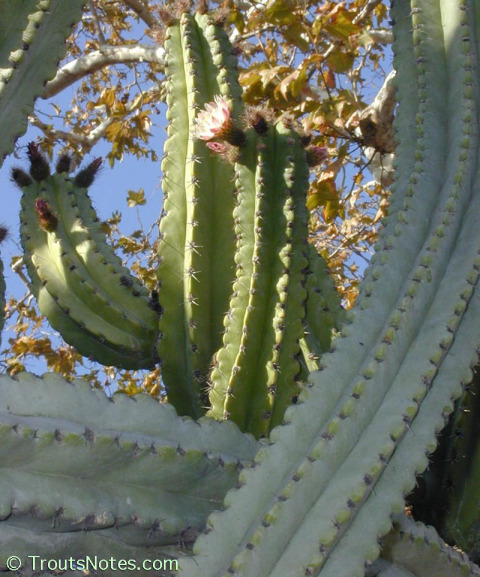 Original description of Robert Roland-Gosselin (translated into English):
“This species was discovered growing in places 2,000 meters or more above sea level at Cerro Colorado, near Tehuacan. It bears the indigenous Mixtec name of Chende. According to Mr. Diguet, the Nahuatl name is Cotzonotsehtly, meaning “yellow cactus”.
From about one meter from the ground, it ramifies much and forms, by the piles of the branches, a kind of umbrella.
The photographs show specimens of about 6 meters high, with a much larger diameter at their summit.
The branch observed was 11 centimeters in diameter, seven 3-centimeters deep ribs, subacutely crenellated, not furrowed laterally; their sines forming angles of 90 degrees. Areoles spaced 25 mm apart, placed at the bottom of the notches; They are felted, prominent, and round. 6 Radial spines that are less than 2 cm. The lower spines are longer than the higher spines. All are subulate, starting out, soon becoming gray. No central spines.
Flowering occurs on younger areoles of the previous growth. Pointed buds are covered with brown bristly hairs.
At anthesis, the ovary is nearly spherical, about 12 millimeters in diameter, emerald green, and covered with tight little tubercles, between each of which has a noticeable areole with abundant slender sharp, rigid, brown spines, sometimes up to 4 inches long, interspersed with short wool that is fine & reddish.” (continued below) 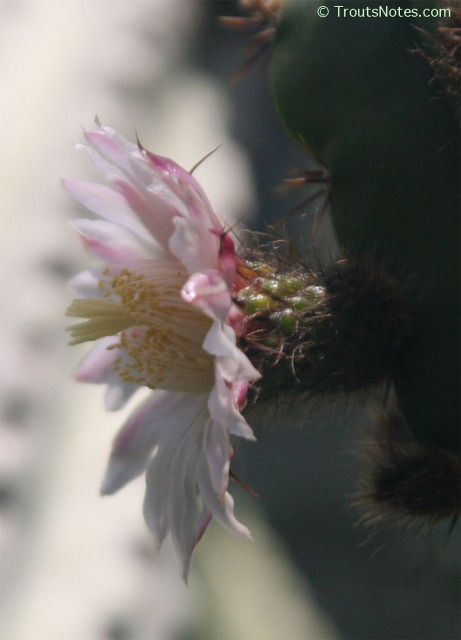 “Fleshy receptacle is very short, not more than 1 centimeter. It is covered with green scales that are overlapping & triangular, terminating as a thin brown mucron that is scarious in texture, sometimes 7-8 millimeters long.
The sepal scales are red to pinkish with a white edge, ending in spikes similar to those of receptacle scales.
Sepals are an inch and a half long by 5-6 mm wide, bright carmine red on the outside, much lighter inside, terminated with a brown tip 2-3 millimeters in length.
Petals are as two rows, the same size as the sepals, forming a spread of 4 centimeters in diameter. The outer row is pink outside, white inside. The inner row is pinkish white on both surfaces. They all terminate in a short brown tip.
Long light yellow stamens of 1o to 15 mm are inserted in steps over the length of the receptacle, with light yellow anthers.
Style is stout, 22 millimeters long, yellowish white, with 11  stigmata, 7-8 mm long, spreading, exceeding the stamens in length.
Nectar chamber is 5 millimeters long, full of syrupy liquid.
The flower gives off a strong enjoyable perfume.
The ripe fruit is pungent and edible, and sold in Mexican markets. It is of the size of a small walnut, covered with brown spines, resembling a sea urchin.
According to Mr. Diguet, the fleshy part of the internal stem is a saffron yellow color, extremely rare in the other species of Cereus. This exceptional trait had not escaped the notice of the aborigines, since, as I said earlier, the Nahuatls referred to the plant as the “yellow cactus”.
The seed is black, very small (1 mm long and 1/2 millimeter wide), finely pitted, subventral hilum is appressed.” pp 505-506, Roland-Gosselin (1905) (The above was adapted from the French original.) 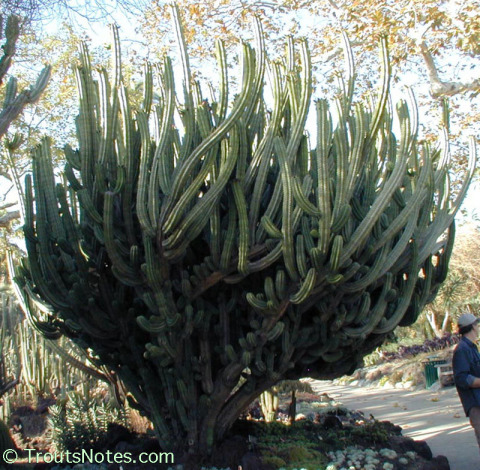 Slender branches with 7 to 9 sharp ribs.

Areoles on older branches are 1.5 cm apart but may be closer on
young growth.

Spines are brown to bright yellow turning grey with age. There are usually (2-3) 5 radial spines (1-2.5 cm long) and the centrals (1-2) are a little longer but not always present. 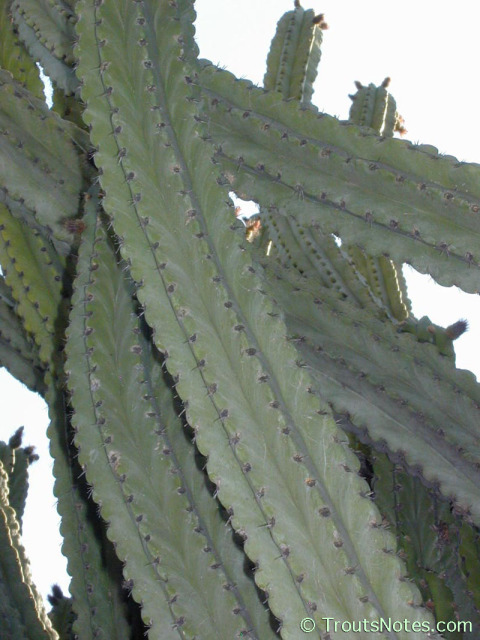 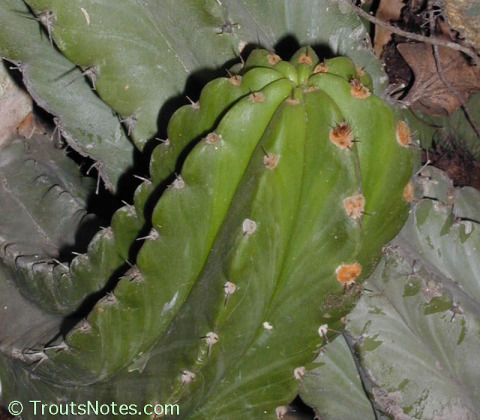 Mescaline and DMPEA were both indicated to be present at less than 0.01% by tlc while the tandem MS estimate was 0.01%.

Shamma & Rosenstock 1959 did not report any alkaloids but did isolate and identify the following triterpenes:
Oleanolic acid
Oleanolic aldehyde (First reported occurrence in nature.)
Erythrodiol 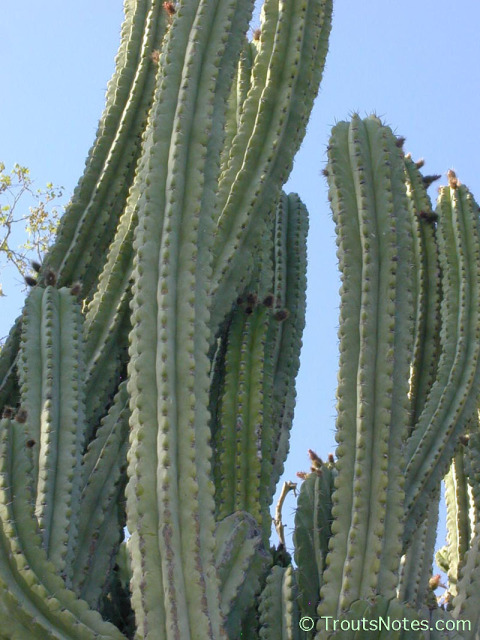 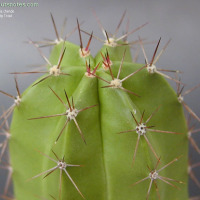 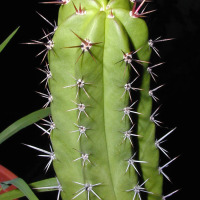