This is a recognized species. 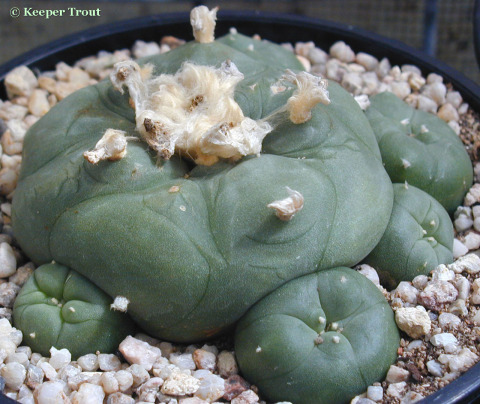 Mescaline has been reported to be present in trace amounts. It has not been detectable by all researchers. (Those should not be viewed as being conflicting accounts but rather they should be understood as having results differing based on the cacti they analyzed. There is no reason to believe that any of the results were not valid.) 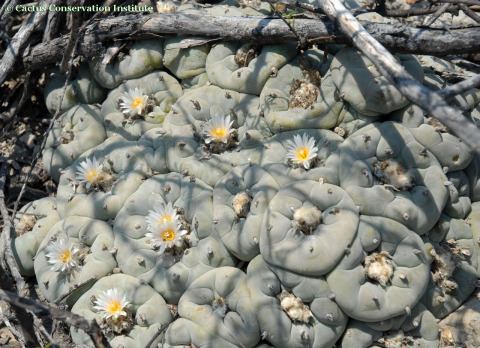 Lophophora diffusa in habitat
from the Cactus Conservation Institute

Origin: Endemic Mexican cactus now found only in two relatively small areas such as around Peňa Blanca north of Vizarrón in the Mexican state of Querétaro [around 1,500 meters (5,000 feet) in elevation] and in another small population closer to Vizarrón. It is known to have formerly had more occurrences that now appear to be gone.

Habitat: Lophophora diffusa‘s habitat is stony limestone hillsides covered by thorny plants with thickets of both thorny and unarmed microphyllous shrubs (many of which serve as nurse plants). 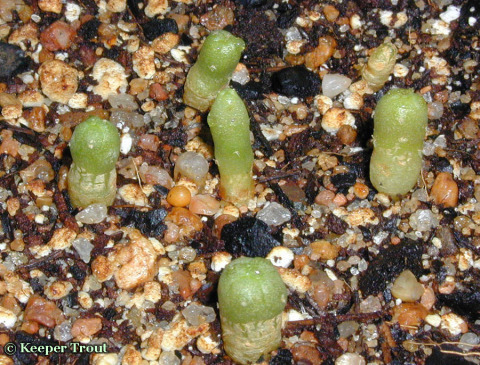 One ould like to suppose this species had a nice start in botany. A major problem began when Léon Croizat inexplicably decided diffusa should be placed as a variety of Lophophora echinata. We will return to this again in a moment but the peculiar amount of confusion surrounding the entry of this species into botany needs to at least be mentioned.

One can only puzzle as to what Croizat was thinking.

I suspect that many of Backeberg’s problems originated with his use of Croizat’s descriptions as a basis for his classification within this genus (apparently not caring that some was based on Rouhier) and that this was largely the source for the confusion surrounding echinata as it is now known in horticulture. 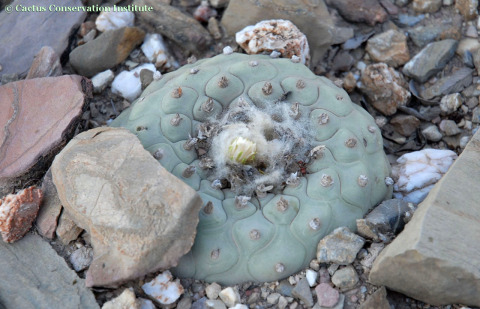 Habitat photos from Cactus Conservation;
reproduced here with their permission

Body is yellowish-green [Anderson 1980, Schultes & Hofmann 1980; This is the only color I have observed in plants raised from seed], Grey-green, sometimes rather yellowish green. [Schultes & Hofmann 1992: p. 48], always with a grayish glaucous haze on the surface. Chalky green to pale bluish-green according to Lamb & Lamb 1978 (which raises questions in my mind about this and possible contribution from the European echinata/Lewinii intersection with Lophophora diffusa),

They are usually lack well defined ribs and furrows, podaria are rarely elevated but are broad and flat; especially so on larger old plants. (Some Japanese cultivars such as “Big Breast” have been selectively developed for sake of having large and prominent podaria.) In contrast to the more regular distribution seen in L. williamsii, the tufts of hair are spread unequally on the prominent podaria. Old plants may form up to 13 very sinuous low spiral ribs sometimes with well defined tubercles in the sense commonly regarded as being for “decipiens”.

Areoles are circular and small, set 1-2 cm. apart, ranging from 2 to 3 mm in diameter, bearing a small tuft of short white or grayish white hairs.

Hypanthium is naked and green; greenish-white receptacle tube has scales that are 2 to 6 mm in length,

Pyriform seed, from 1 to 1.5 mm in length, with testa tuberculate.

Pollen is 0-6 colpate, 26.1-48.5 mm in diameter. Pollen is much less variable than L. williamsii and shows a higher percentage of tricolpate grains. 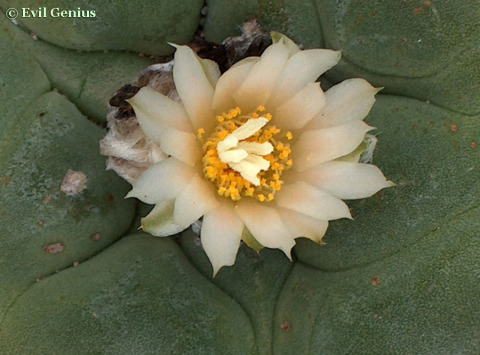 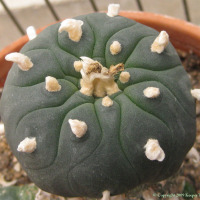 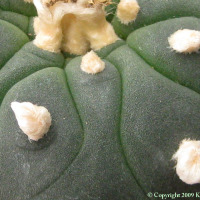 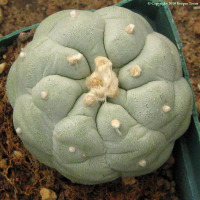 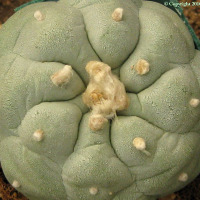 Associations: According to Bravo, Lophophora diffusa grows at the base of and in the shade of such shrubs as creosote bush (Larrea tridentata), cenizo (Leucophyllum texanum), cat’s-claw (Mimosa biuncifera), huisache (Acacia farnesiana) and other species of the arid highlands. (Bravo 1991) 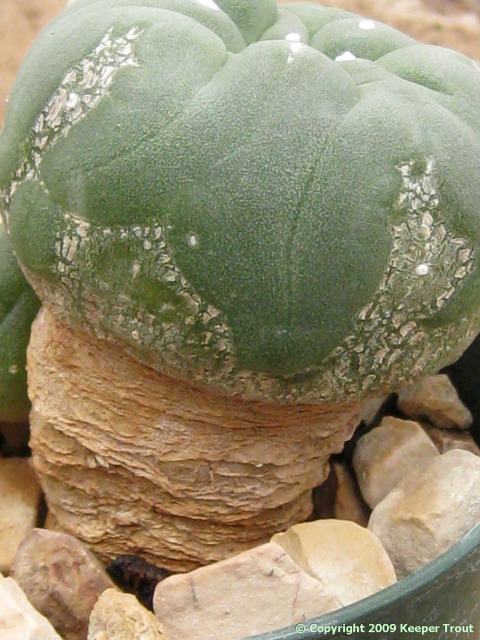 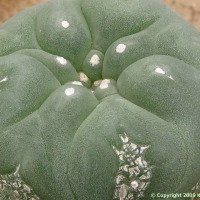 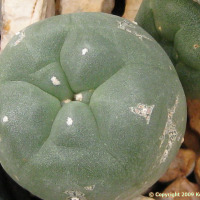 A more detailed listing of associated species does not appear to have been created yet but the following can be observed in Cactus Conservation Institute photographs online: 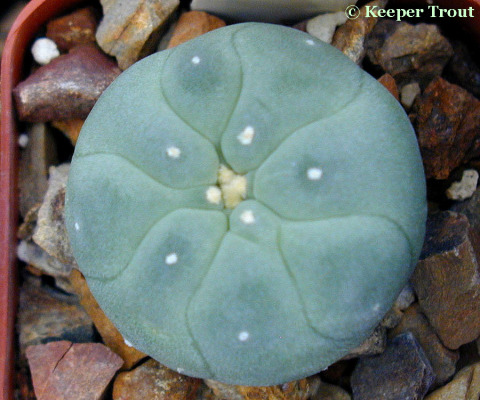 There seems to be no common name in the West to distinguish this from peyote. It is usually called peyote. Early literature sometimes referred to it as Anhalonium williamsii and much has been made of this by Holmstedt & Bruhn as it involved some of the early chemical and ethnobotanical accounts. See more in an analysis concerning what they refer to as  “The Lewinii Controversy.”

Heffter had apparently acquired Lophophora diffusa as peyote so noted Anhalonium williamsii during analysis to be chemically distinct from Anhalonium lewinii as he could only isolate pellotine from it. It seems probable that his A. lewinii was the dried material Parke-Davis had sent to Lewin. (From the latter Heffter isolated mescaline and several other alkaloids) Kauder and Lewin both also recognized there were two species based on chemical differences although only Heffter included illustrations. This topic is discussed in more detail in the comments on “Lewinii” and in the entry for L. williamsii (under its reported chemistry).

Suggestions for more in depth analysis and revision of the genus went largely unheeded until fairly recently. Even as late as 1959 the Bulletin on Narcotics insisted on referring to peyote as a monotypic genus consisting of only Echinocactus williamsii (Anhalonium williamsii), rejecting the name Lophophora entirely (Echinocactus williamsii was described by Lemaire 54 years prior to Coulter’s separation of the genus Lophophora). They interestingly dismissed Anhalonium lewinii as a pseudo “new species”  [Note 3].

Britton & Rose similarly also believed there was only one species; Lophophora williamsii. 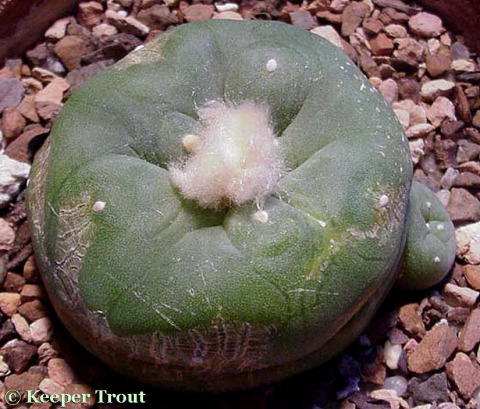 Bruhn & Holmstedt 1974 were unable to identify mescaline but observed N-Methylmescaline to be present in trace amounts in the nonphenolic fraction (using GLC-MS). There were other alkaloids present  that were at levels too low to identify.
One of these turned out to be O-Methylpellotine and they published the details in a subsequent paper. See below.
In fresh whole plants, they found a total alkaloid content of 0.90% of which 98% was phenolic and 2% was nonphenolic.
Pellotine was identified as major alkaloid in phenolic fraction. Small amounts of anhalidine and trace amounts of both anhalonidine and hordenine were observed in the phenolic fraction as well using tlc and gc. They did not observe anhalamine. Anhalamine and mescaline, if present, were at trace levels too low for them to detect. They made no mention of lophophorine.
Plants were collected north of Vizarrón on 29 June 1971 by Jan G. Bruhn and Hernando Sánchez-Mejorada.Herbarium voucher was made.

Bruhn & Agurell 1975 identified O-Methylpellotine as a trace component of L. diffusa.
They were unable to isolate it due to low concentration present. [They recovered 10 mg. of non-phenolic alkaloids from 500 grams of fresh plants.]
Identified by tlc, GC and GLC-MS with a known reference sample.
Herbarium voucher was made. 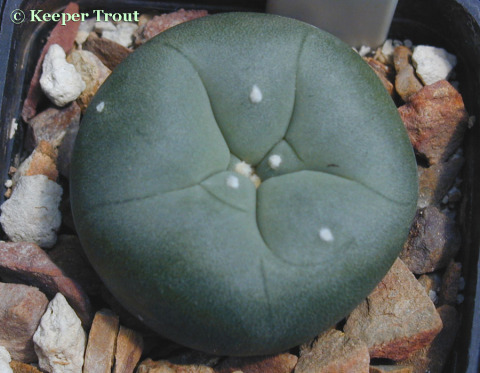