The members of Stenocereus have typically worn four or more names during their botanical history.

Stenocereus is derived from the Greek word stenos “slender”; for sake of having thinner branches than a true Cereus spp.; however, this is not true for all Stenocereus and Cereus species. “Cereus” came from the Latin cera meaning “waxy” in reference to the candle or candelabra-like shape of the Cereus species.
Lemaireocereus was named after Charles Lemaire.
Hertrichocereus after William Hertrich.
Rathbunia after Richard Rathbun.
Ritterocereus after Friedrich Ritter.

More detailed information concerning the published analysis of these species can be found in Sacred Cacti Part C, section 2: Cactus Chemistry By Species. [link to PDF of “light” version])

The species of interest in this discussion:

Stenocereus hystrix (This will be discussed within Questions & Errors – an entry is due for completion in the near future.) 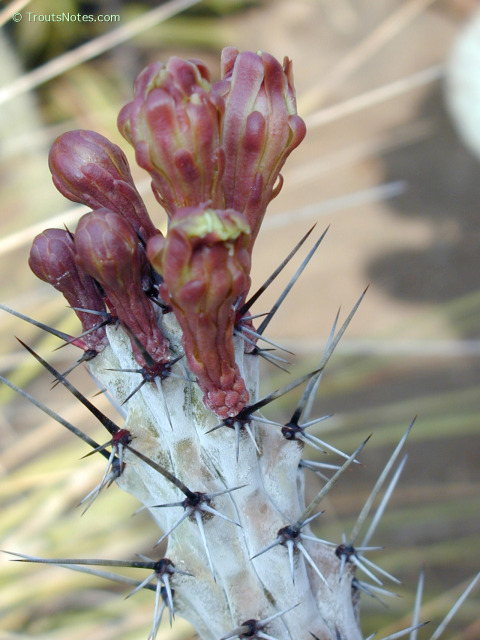 Distribution & occurence: Occurs in Mexico; in Guerrero in the Canyon de la Mano and del Zopilote. It may also occur in Puebla. Backeberg 1960

Plant is bright green but may be reddened, around 1.5 meters tall, may be erect or prostrate with sprawling branches that have 7 to 9 ribs.

5 radial spines are around 1.5 cm long; one central spine up to 5 cm long. Sometimes the spines have fallen off.

Red colored fruit is 5 cm long and 3 cm in diameter. 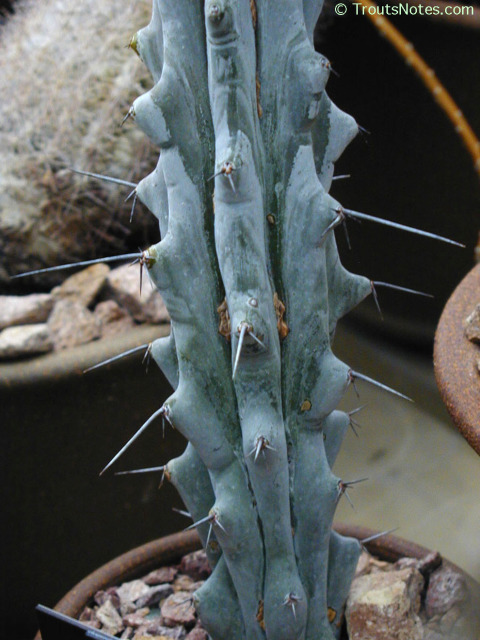 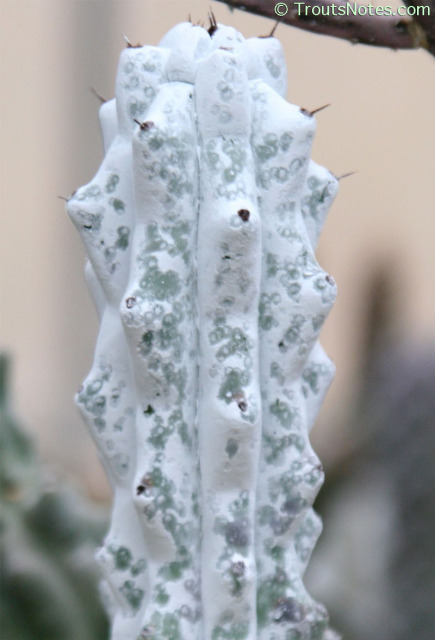 3,4-Dimethoxyphenethylamine was indicated by tlc as less than 0.01% while ms-ms estimate was 0.01%.

3,5-Dimethoxy-4-hydroxyphenethylamine was estimated at 0.01% (tlc and ms-ms) 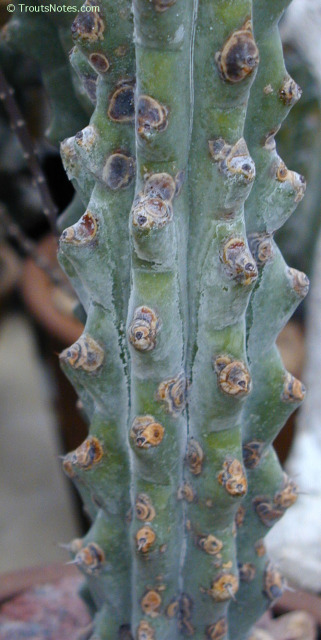 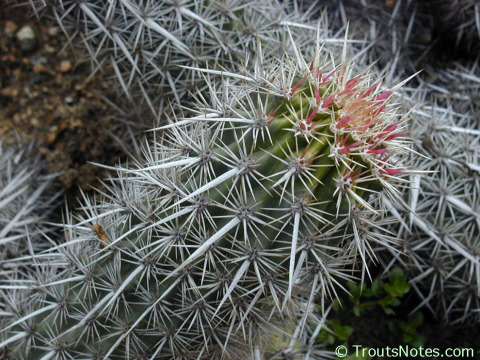 Etymology: Machaerocereus was from macaera “dagger”, hence one common name ‘Dagger Cactus’, in reference to the shape of the spines; eruca is similarly from the Greek meaning “caterpillar” in reference to its creeping habit.
Pizzetti 1985 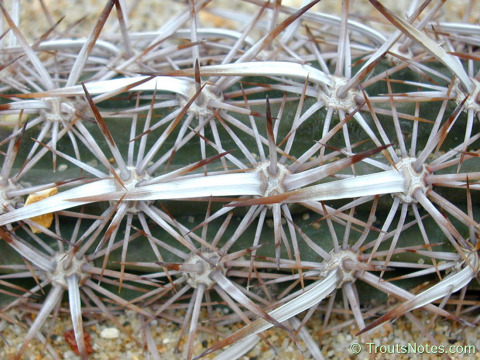 It is easy to see why some people would call this the “dagger” cactus.

Common names: Most commonly called the “Creeping Devil.” Also known as “Chirola” and “Chirinole” and “Chilenola.”

Distribution & occurrence: From Mexico in the Baja, Llano de la Magdalena and Magdalena Island. Brandegee described it as being “Common on the sand of Magdalena Island and about San Jorge.” 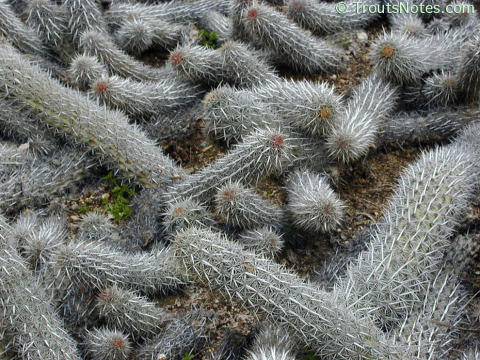 “Prostrate, very rarely branched, 13-ribbed, 3-4 feet long, 3-4 inches in diameter; rooting from the under side of the older growth, decaying at one end and growing forward at the other, generally in patches of 20-30, probably originating from a common center: areolae 4-6 mm. in diameter, separated about the same distance: spines about 20, stout, ash-colored, less than an inch long, the exterior cylindrical, the interior stouter, angular, somewhat and the lower central one much flattened, more than an inch long, angular, strongly reflexed: flowers and fruit not seen. […] The manner of growth, with uplifted heads and prominent reflexed spines, gives the plants a resemblance to huge caterpillars. The flowers are said to be yellow.” p. 163 in Brandegee 1889.

Plants grow prostrate with the growing tip slightly elevated. Many times the decaying base of the plant with new roots forming under the plant give the impression that they are slowly crawling away from their point of origin leaving a trail of debris (hence its most common name).

Stems are usually 1 to 3 meters in length and 4 to 8 cm in diameter.

There are usually around 12 ribs with large areoles set about 2 cm apart.

They are fiercely spined (unequal and pale grey or white) with around 20 spines per areole. 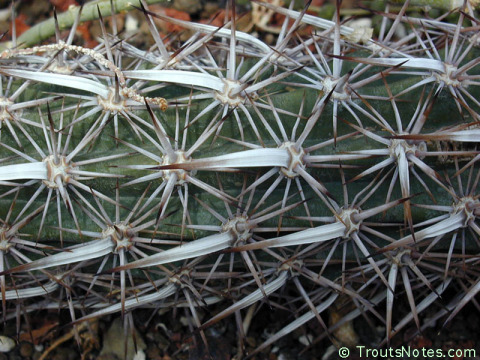 Mescaline was indicated to be present at less than 0.01% (dry weight) by tlc but was not observed using tandem mass spectrometry.

3,4-Dimethoxyphenethylamine was indicated to be present at less than 0.01% (dry weight) by tlc but was not observed using tandem mass spectrometry.

3,5-Dimethoxy-4-hydroxyphenethylamine was indicated to be present at 0.01% (dry weight) by tlc but was not observed using tandem mass spectrometry.

The triterpenes, Lupeol and Lupenone, were isolated by Kinoshita et al. 1992.

Djerassi et al. 1955 found a triterpene composition quite similar to that of both Lemaireocereus stellatus and Lemaireocereus treleasei. They detected no alkaloids. (See comments on Djerassi’s analysis farther below)

W. Taylor Marshall & Thor Methron Bock 1977 noted that this cactus, although popular, is very prone to rotting and rarely flowers in cultivation. They recommend that the soil be well draining but not too rich and that due to its slowness in rooting, water should be withheld at first and then given only lightly. 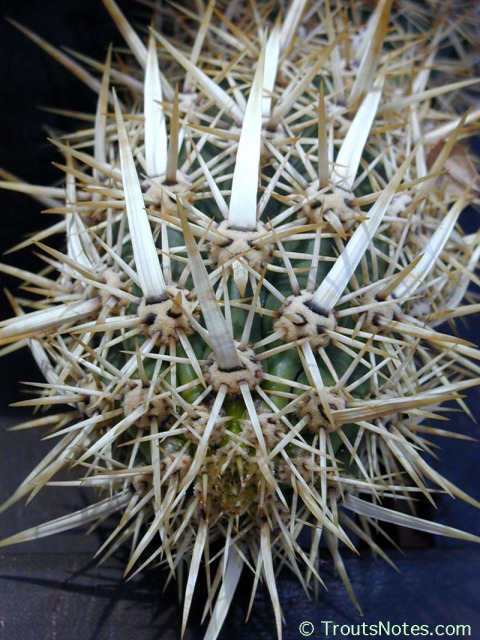 See the entry under Questions & Errors 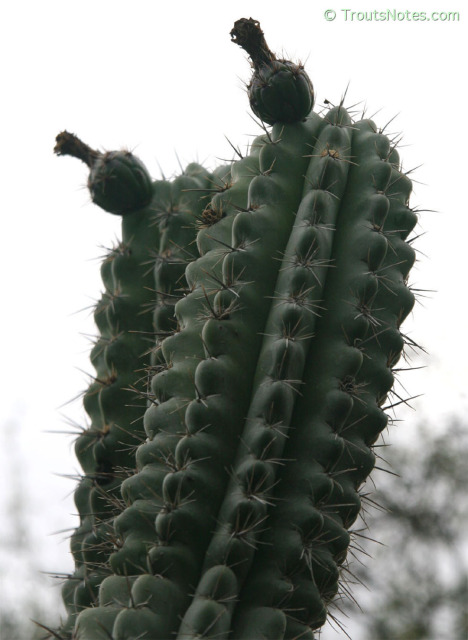 Fruit is called “Joconoxtle” Helia Bravo 1931. Britton & Rose 1920 also noted the fruit to be known by that same name in local markets and occasionally as “tuna”.

Etymology: “stellatus” is in reference to the starry or “stellar” appearance of the spine clusters. The adults can be stunning. 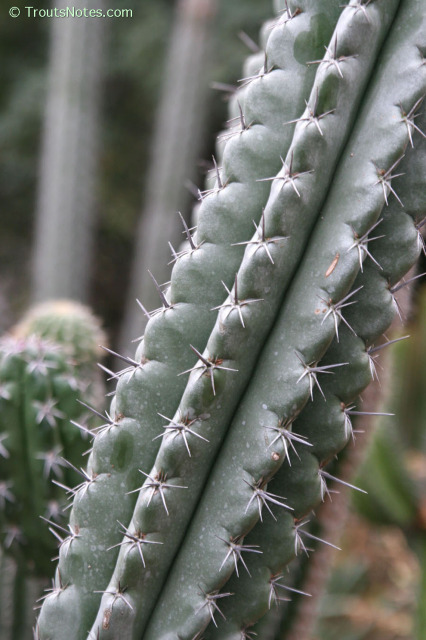 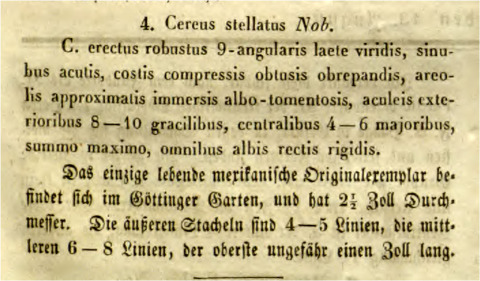 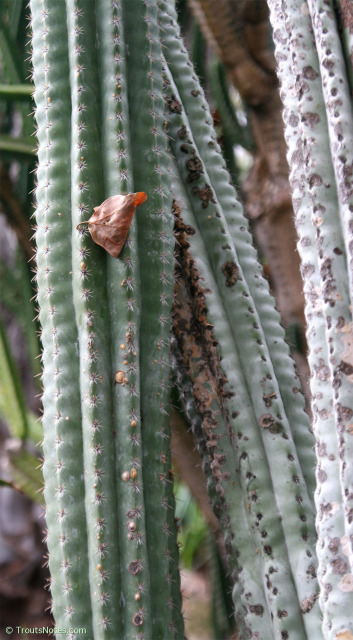 Erect columns to 3 meters tall. Matte, dark green often reddish (Backeberg). [Pale bluish green (Britton & Rose).] Branching mainly from the base. Branches can be up to 8 cm in diameter.

The 8 to 12 ribs may show tubercles but are low and obtuse.

The areoles are white, set 1 to 2 cm apart and have 8 to 12 spreading radial spines up to 12 mm long. The 10 to 12 radial spines usually are shorter than the centrals. There are 1 to 3 brown central spines which can reach 2 cm. (Britton & Rose say they can reach 5 to 6 cm)

It bears white flowers at or near the apex, which are pink on the outside (red according to Britton & Rose) and up to 6 cm long (4 in Britton & Rose) The deciduously spiny spherical fruit is 3 cm in diameter, red and edible. 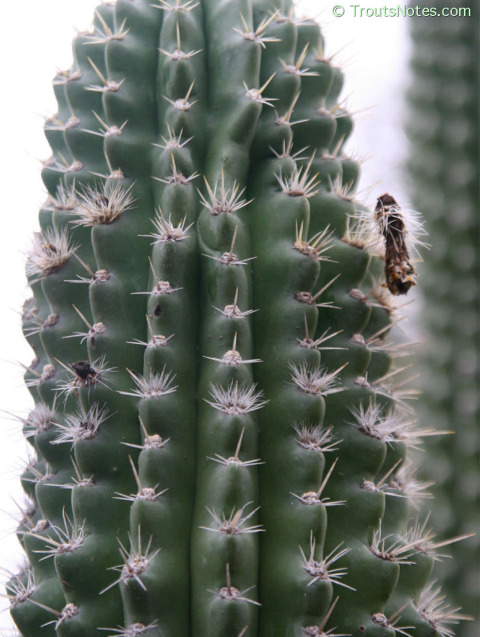 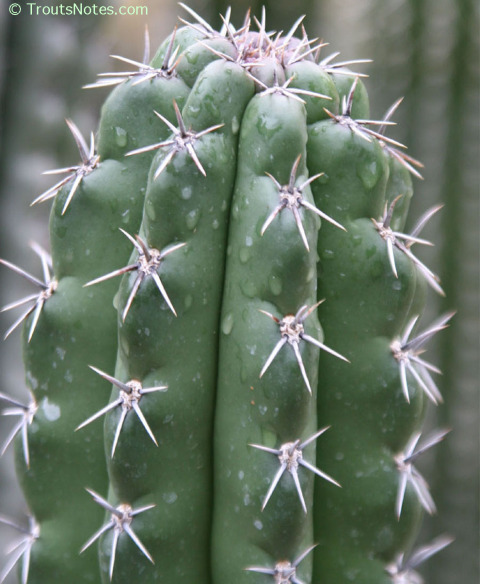 Djerassi et al. 1955 found 3.5% triterpenes (reporting both oleanic acid and the triterpene lactone stellatogenin) but reported no alkaloids from this species. See comments on Djerassi under Stenocereus eruca. 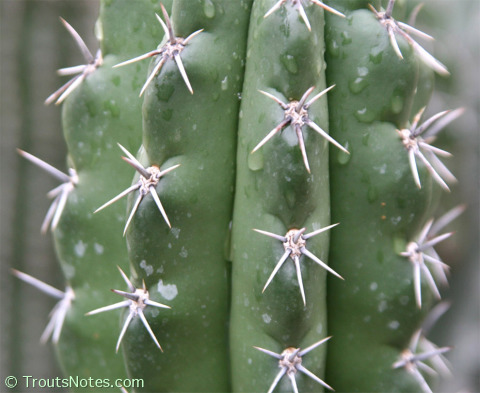 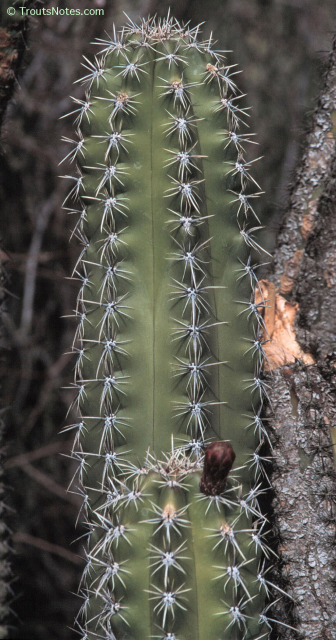 Etymology: “treleasei” was for the botanist William Trelease. 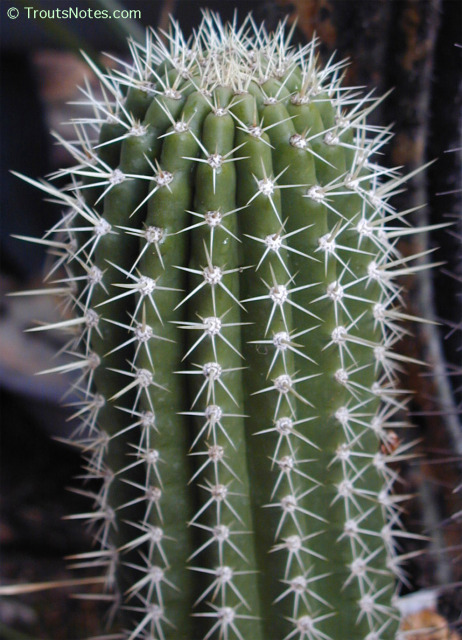 There are up to 20 tubercled ribs with a v-shaped depression.

Spines are short and yellowish, borne in groups of 7 to 9. Later one grows longer and appears more distinctly central.

Diurnal flowers resemble S. stellatus but are up to 5 cm. in length.

Fruit is red and covered with deciduous spines. 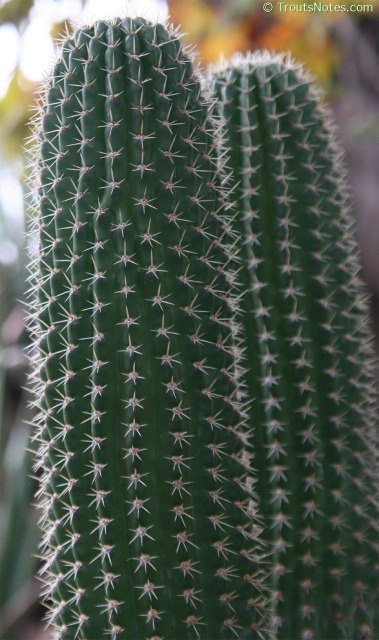 Britton & Rose noted that the plant is not common in the deserts around Oaxaca but does occur in clumps. They mention that while its flowers and fruit resemble those of Lemaireocereus stellatus it has a different habit, more ribs and different areoles. They characterize it by having seldom branching, strict, elongated stems. 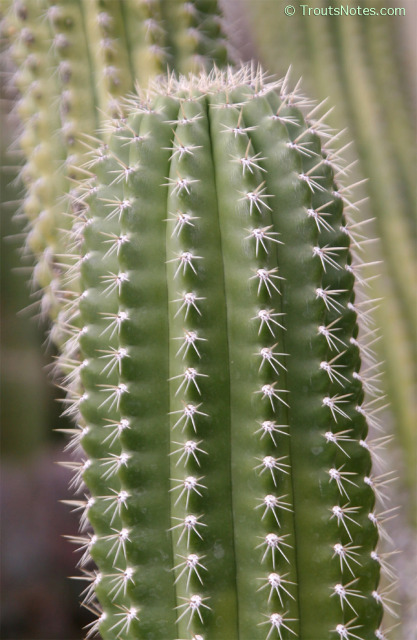 Ma’s specimen was unvouchered and may actually have been a form of S. stellatus.

Djerassi et al. 1956 found oleanic acid and the triterpene lactone stellatogenin but reported that no alkaloids were present. See comment on Djerassi  below. 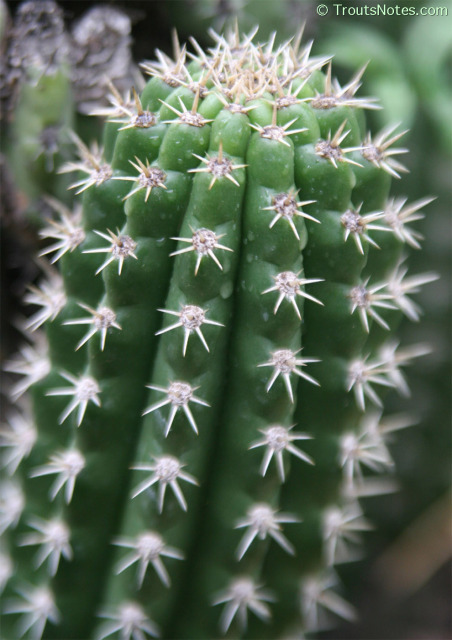 re: Djerassi reporting the detection of no alkaloid

During their studies elucidating the terpenoids present in a number of plants, Carl Djerassi and coworkers published a series of papers in which they reported finding no alkaloids in numerous species that were later determined by other workers to contain alkaloids.

Djerassi’s alkaloid detection procedure usually consisted of extracting with alcohol, evaporating to a residue and extracting the residue with ether. They assumed any alkaloid present would be extracted into the ether and show alkaline results. Many alkaloids, including mescaline, are not particularly soluble in ether. Others are neutral rather than alkaline. If one examines their results, it rapidly becomes unsurprisingly apparent what the few alkaloids they did report from cacti were all ether soluble (such as anhalonidine reported from Lemaireocereus (Pachycereus) weberi in Djerassi et al. 1954).

Many cacti which they assayed as negative (such as several of the numerous Lemaireocereus spp. they looked at) were subsequently shown to contain only trace amounts of alkaloids by later workers but others (such as Trichocereus peruvianus) proved to be a good source of alkaloids.

Djerassi and coworker’s papers should be noted by chemotaxonomists.
Both alkaloids and compounds such as triterpenes and lactones are valuable qualitative marker compounds for chemotaxonomic work in spite of their quantitative variability.
Unusual amino acids observed in seeds and flavones are good and proven markers.
Biominerals also appear to have diagnostic usefulness.

Chemotaxonomy is best viewed as a supplemental tool and cannot replace the existing taxonomic system on its own. While alkaloid and triterpenes present reflect what enzymes are expressed and hence mirror elements of genetic structure, not all genes are necessarily expressed. This is an important point in understanding the sometimes conflicting array of plant products formed by closely related plants.

Anyone with an interest in chemotaxonomic approaches is urged to obtain a current and solid understanding of and familiarity with what is presently known in immunology concerning variability of gene expression, (regardless of their qualifications and background). What has been elucidated concerning the origin of the variability and diversity of antigen receptor sites (in humans) is most applicable towards enlightenment in this area. Chemotaxonomy might be welcomed and understood rather than resisted and belittled for its limitations.