This is still most often referred to in plant databases as Acacia berlandieri. 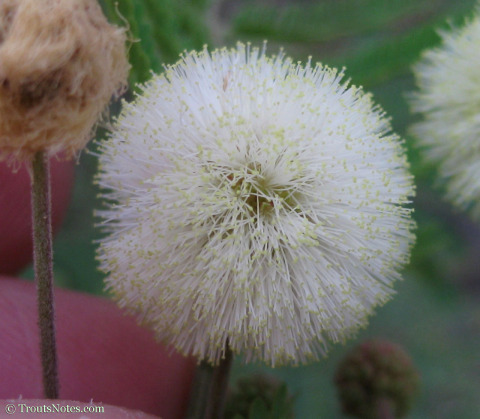 Etymology:
Acacia Merriam-Webster gives as derived from the Greek akakia referring to a “thorny Egyptian tree,” adding it is perhaps related to the Greek word ake meaning “point” or “thorn”.
Senegalia is unclear in its intended reference, as it was not explained when it was published, but is thought to be from “gum senegal” which is a high-quality Acacia gum.The name itself was obviously derived from the African nation of Senegal.
berlandieri was named to honor Jean Louis Berlandier, a French naturalist & botanical explorer, who collected this species. 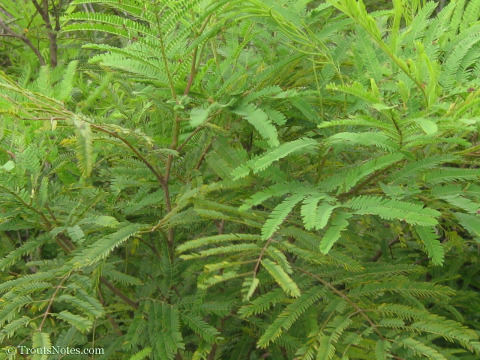 Habitat:
Thorny brush country. Grows abundantly in many dry soil types, including limestone, caliche and gravels, occurs in coastal prairie, abundant in South Texas plains on limestone ridges and cuestas, southern Edwards Plateau and in the Trans-Pecos but it is most prolific in shallow soils and on ridges. “Brush country on rocky hills, slopes or flats, limestone outcrops, often with mesquite-oak or cactus-mesquite“, (Isely 1969). Does best in full sun but can tolerate partial sun. 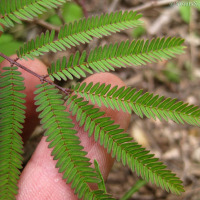 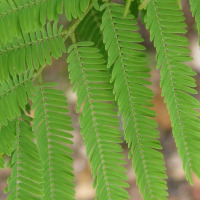 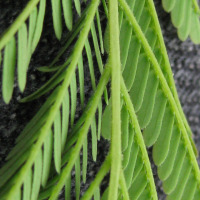 Description:
A small semi-evergreen bipinnate small tree or shrub, 3-4.5m tall (sometimes larger with irrigation) and often growing as wide as it is tall.
The many white-tomentose trunks arise from a stubby root with a very deep root system.
The plant may be (relatively) unarmed or may be prickly with scattered curved small spines.
The long, slender stems bear only a few branches, mostly on one side.
Foliage is green to gray-green, soft, lacy and from a distance is almost fernlike in appearance. Petiolar gland is sessile; stipules small, caducous; pinnae as 10-12 pairs; small leaflets in 30-50 pairs, linear, 4 mm. long, tomentose, becoming glabrate; peduncles axillary, sometimes in pairs or in leafy racemes, pubescent, 2-5 cm. long;
Fragrant small flowers in dense round clusters to 1.5 cm, creamy-white to yellow; Calyx 5-lobed, the lobes valvate, Corolla 5-lobed, calyx and corolla pubescent; Stamens are many and distinct, the yellow anthers are small; Ovary is densely white-lanate;
Fruit is a reddish (when ripe) dehiscent legume, 1o-15 cm. long, 1.4-2.5 cm. broad. It is compressed, flat, thin, tomentose and somewhat turgid when ripe. Its valves are chartaceous or coriaceous. The young legume is white.
5-6 light brown seeds.
Adapted from Britton & Rose 1928, Isely 1969, Park 1922, Richardson & King 2011, & Van Dersal 1938.
[Botanical glossary] 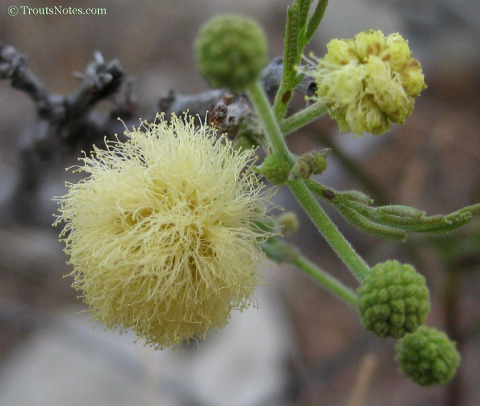 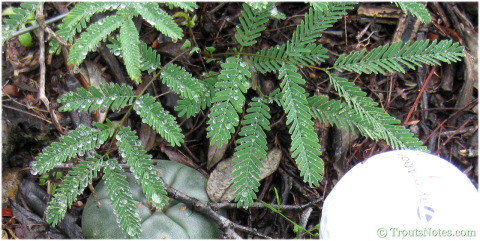 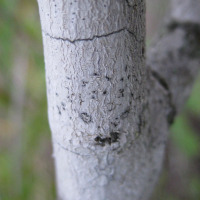 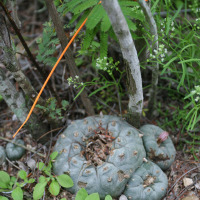 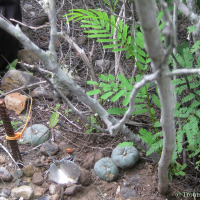 Uses:
Ornamental shrub, erosion control and widely regarded as producing a superior quality honey that may be pale or “water white” (Parks 1922).
Used by the Long-tailed Skipper (Urbanus proteus) as a larval host and nectar source, Ladybird Johnson Wildflower Center. 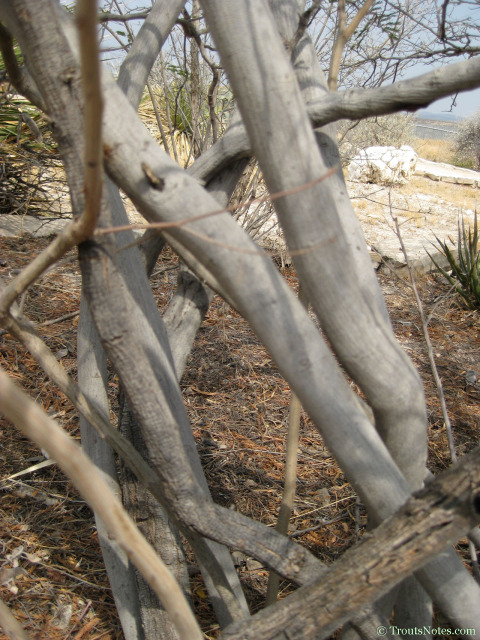 Other:
Prefers full sun and dry soils. Tolerant of high heat and cold to 10°F. Seeds are said to need scarification or acid soak. 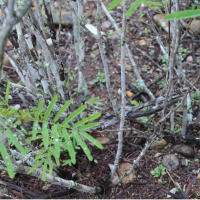 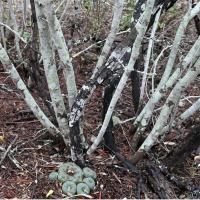 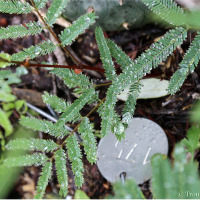 Acacia berlandieri in the rain

Controversy:
Results of the  analysis published in Clement et al 1997 were called into question in Pawar et al 2014. 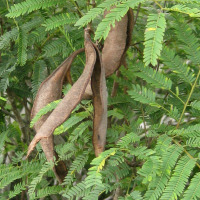 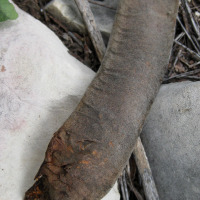 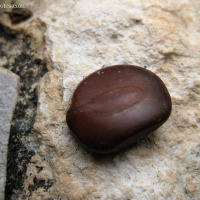 Note A: A comment seems to be in order concerning the name Berlandier Acacia / Berlandier’s Acacia.
Unless there is evidence to the contrary, I have grown to distrust the actual historical legitimacy of most of the common names that appear to be direct English conversions of Latin binomials. Berlandier’s Acacia MAY be a good common name but it can be readily noticed that the vast majority of these names arose when botanical database compilers in the USDA and other governmental agencies who were creating plant databases perceived a need for common names where they were lacking It could be justly said that those are now common names but I’d suggest that to be legitimately considered a common name, that name should actually already be in common use by someone before appearing in print.
In the case of Berlandier Acacia I can presently only track the use of this name back to around 1970 when it appeared in USDA plant species listings. Earlier publications, including those from USDA (such as Van Dersen 1938), do not appear to include the name. Information to the contrary is welcomed.

Note B: Guajillo, the most common name, has had many origins proposed.
The most accurate one, even if broad, appears to be that it is a diminutive form of the Mexican word guaje (derived from Nahuatl uaxin) which has several meanings.
Guaje can variously mean, a boy or youth, a gourd, “foolish”, “silly”, and a species of Acacia [in reference to what is now called Leucaena esculenta], (from El Diccionario de la lengua española) It is also the name of a chili pepper.
Guajillo has been suggested to be a Spanish word variously presented as meaning “big pod” and “little gourd”. Most of those two translations involve the chili pepper with this name rather than the Acacia.
The translation as “big pod” appears many places, for example in Scott Linquist & Joanna Pruess (2007) Mod Mex: Cooking Vibrant Fiesta Flavors at Home, but does not appear to make sense.
I have not yet located the actual initial appearance of “little gourd” as a definition but I did find it interest that the sentence “Guajillo means “little gourd” for the rattling sound the seeds make in dried pods” can be found reiterated on 260 primarily seed-vending websites with little to no variation. The “pod” in that sentence also refers to the Capsicum fruit not that of the Acacia.
Guaje is also a well known southern Mexican and Guatemalan plant (now Leucana esculenta) which similarly can become increasingly toxic to the browsing animals that choose it so guajillo may have been coined in reference to it looking very similar but with much smaller leaflets.
Parks 1922 creatively suggested it to possibly be derived from aguajillo and to be connected to water in some way. Parks offered aguajillo as possibly meaning “little water jug” for the sake of the leaves capturing and holding dew, or, possibly, “little water” to reflect it tending to grow in dry places. Both are inaccurate despite making true statements.
Parks’ speculation about the word guajillo and the plant holding water amidst the structures of the leaves does contain an interesting observation even if it appears baseless as a suggestion for the etymology. 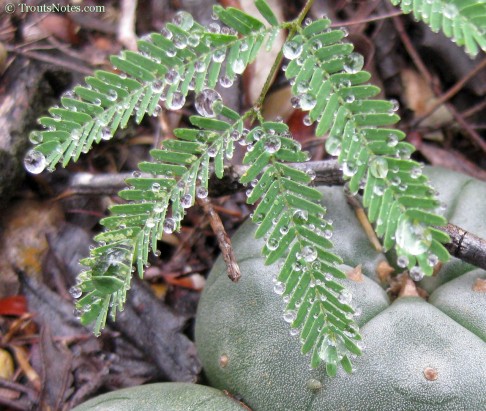 Acacia berlandieri after a rain 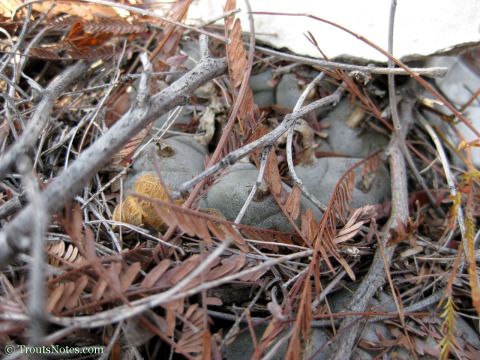