Nathaniel Lord Britton & Joseph Nelson Rose (1920) The Cactaceae, 2: 71, as Pachycereus (?) gaumeri. (Given as a provisional name)

[Now  Anisocereus gaumeri (Britton & Rose) Backeberg. This is presently the most commonly encountered name although modern authors are moving towards lumping this into Anisocereus foetidus.] 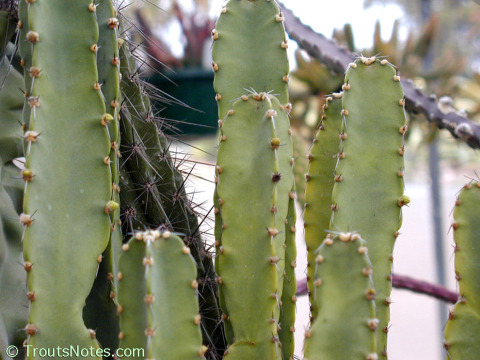 Etymology: Ptero- means “wing” or “feather” (from “pteron”); Pachy- means “fat” or “thick”; Aniso- is a prefix meaning unequal, assymetrical or dissimilar. All are from the Greek. Cereus is from Latin; meaning “torch” [or “wax”]; as the earliest encountered species were candelabra-like.

Distribution & occurrence: From Mexico. (Yucatan) At Hodo and east of Izamel according to Britton & Rose 1920. Does not appear to be abundant in the wild.

“Plant slender, 2 to 7 meters high, erect, simple or few-branched; branches 4-angled or winged; ribs thin, 3 to 4 cm. high; areoles large, 1 to 2.5 cm. apart, brownfelted; spines several, slender, 1 to 3 cm. long, brownish; flowers yellowish green, 5 cm. long; scales of the ovary and flower-tube more or less foliaceous, drying black and thin, with brown felt in the areoles; scales on the ovary linear, puberulent; fruit not known.
This species is based on two collections, both made in Yucatan by George F. Gaumer, as follows: No. 23778 at Hodo, April 1917 (type), No. 648 at Port Silam, 1895. Dr. Gaumer writes of these numbers as follows:
“[…] It grows erect, has few branches, many flowers on each plant; it is very common at the senote Hodo where the most of the plants range from 6 to 10 ft. high; it is a delicate-looking Cactus of a light pea-green color, quite showy, the flowers are of a light green tinged with cream-color, they do not open out much but remain almost cylindrical. Living specimens were sent to Dr. Britton at Bronx Park. It blooms in May and is found about four leagues east of Izamal. […]
Since the above description was written, Dr. Gaumer has sent another plant (No. 23935) which we believe belongs here, although it differs somewhat from the other plants. […] This plant may be described as follows:
Erect; ribs 5 to 7, separated by broad intervals; areoles 1 cm. apart; spines about 15, 2 to 3 cm. long, weak, gray in age; flower-bud acute, ovoid, covered with green imbricating scales.” pp. 71 in Britton & Rose volume 2. 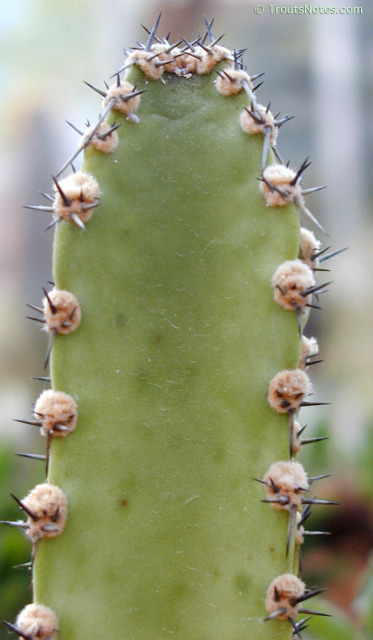 Slender “light pea-green” plants from 2 up to 7 meters tall.

They sometimes have three ribs but may have four. The ribs are thin and around 4 cm high. The brown-felted areoles are large and 1 to 2.5 cm apart with 3 to 6 slender brownish spines that are 1 to 3 cm. long.

Yellowish-green flowers are 5 cm long. Flowers in May.

Fruit is 3-4 cm in diameter, turns dry and globose, small scales at base with felted axils. Scales more or less foliaceous but drying black and thin. 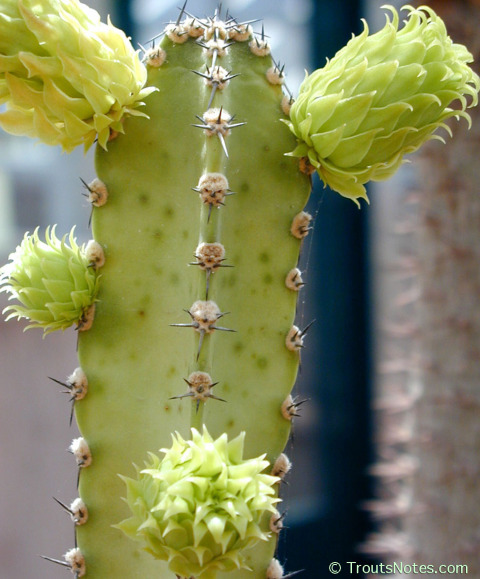 3,4-Dimethoxyphenethylamine was indicated by tlc to be present at less than 0.01% but tandem ms estimated 0.01%.

3,5-Dimethoxy-4-hydroxyphenethylamine was estimated at 0.01% by tlc while tandem ms indicated less than 0.01%.

Pterocereine was found to be the major alkaloid (0.062% by fresh weight).

This is an unusual glucoalkaloid which is decomposed to glucose and the isoquinoline deglucopterocereine by the acids employed in usual extraction procedures and also by the enzyme β-glucosidase.

Mohamed et al. 1979 reported an isolation of 0.164% by dry wt for deglucopterocereine.

It is unusual among the cactus alkaloids not only for the glucose substituted at the 5 position (this would correspond to the 2 position of phenethylamines) but also for having a hydroxymethyl group at the one position, something only observed in calycotamine (from Calycanthus floridus).

The N-oxide of deglucopterocereine has also apparently been reported but Lundström 1983 provided no details. He cited Pummangura et al. (1983) Phytochemistry in press. [This is however not in either the 1983 or 1984 author index.]

Deglucopterocereine is structurally very similar to gigantine, (found in Carnegiea gigantea), which is suspected to be hallucinogenic in animals, and also to some of the Pachycereus alkaloids, several species of which are suspected of being psychoactive.

See more comments in the Cactus Alkaloids (link to PDF), under the Gigantine entry.