The use of Lophophora williamsii by humans 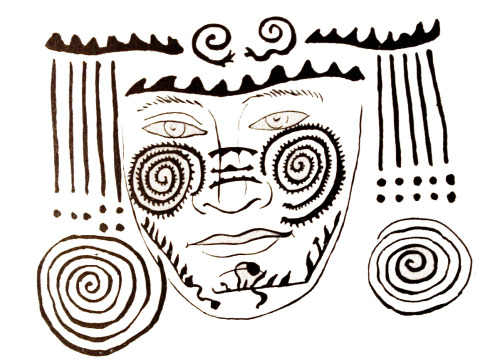 Face painted “like the Gods”
From Toro (after Lumholtz)

Peyote’s sacramental history is of extreme age. Archeologically we cannot know for certain how long it has been used ritually & gathered by humans in Texas; only that this has been occurring for at least some thousands of years. (A similar age for human use of peyote in Mexico is also true.)

Sahagún, writing in the 16th century, thought it had, at that time, been in active use for at least 1800 years. Since Aztec manuscripts were systematically destroyed soon after the invasion it is not clear how he arrived at this figure.

The archaeological record indicates that Peyote has demonstrably been collected and used by native people in Texas & in northern Mexico in excess of 5000 years. See Terry et al. 2006.  (Link to PDF)

Occurrences along the Pecos River (an area of numerous fine examples of shamanic rock art) are in many case gone due to the formation of Amistad Reservoir. Even if populations survived above the water line, it might be wondered just how well peyote would adapt to being a lake-side plant. Schultes & Hofmann 1992 noted that peyote remains found in this region’s rock shelters and dry caves show its use to be present for 3000 years or more. They did not include any details about where that figure had been obtained.   Weniger commented on not being able to locate it growing there in 1970.

There is also the fascinating existence of  so-called “petrified” peyote specimens at the Witte Museum (San Antonio) that were recovered from within human archeological context in the Shumla Cave Dwelling above the Pecos River. (Taylor 1941) These were purportedly carbon dated to 7,000 BP but apparently no accessible records were maintained to support the claim about the dating. (This assertion was inexplicably made by Peter Furst only within a book review and has never been properly published.)

More recently this date was corrected to 5195 ± 20 radiocarbon years (i.e. 4045-3960 BC) in Terry et al. 2006. Those researchers also revealed the true nature of these to be manufactured artifacts rather than dried peyote buttons. Incredibly all previous workers from Taylor through Furst and then DeSmet and Bruhn had somehow failed to recognize that these were not actual peyote buttons.

A curious artifact featured in Schultes & Hofmann 1992 is a Mexican snuffing device that appears to portray a deer holding a peyote in its mouth. This terra cotta piece has been dated (from context) to 500 BC.  Peyote is not known to have ever been used as a snuff [Note 31] so the decoration is a unexplained curiosity.

Among the interesting similarities between native uses of Peyote and San Pedro are their use for lowering fevers, their external application for sores, their frequent use to locate lost objects, identify criminals or foresee the future, their use, especially in a group context, of aiding in difficult cases of healing; and also the fact that both were, and still are, used to elicit supernatural guidance and protection of both person and property (effected by their physical presence rather than their ingestion).
San Pedro is planted not simply as hedging to protect fields but also as specimen plants to protect their caretaker’s home and family from robbers and thieves whom the spirit of the plant is believed to appear to and drive off. [T. bridgesii is also used as a living fence, being planted on walls in Bolivia to protect gardens.]
They have been known to have been used by common people to assist in healing, love, fertility, farming and fishing ‘magic’, for success or continued success, since the earliest of times. The application of all types of hallucinogenic plants in ‘hunting’ or ‘fishing’ magic is well known throughout the world wherever both hallucinogen use and ‘hunting’ or ‘fishing’ magic are found together. [They are NOT always found together.].

As is their use gaining supernatural assistance in many ways, including but not limited to their use for the communication with or the honoring of (or the propitiation of) one’s ancestors. [Perhaps not often enough regarded as the DEAD that one is related to.]

This (the ancestors) is one of the more commonly attributed sources of direct learning, involving plants or meditation practices, among most cultures, whether they use hallucinogens or not. Even in Western society it is not unusual to find people who believe that an emotionally close but dead relative guides them or protects them or has done so on some occasion.

It is unfortunate that our society has so thoroughly stigmatized this topic that it cannot be discussed rationally by many people or treated as an appropriate area for scientific investigation. While the casual use of these plants is blamed as the cause of the current prohibitions; careful analysis of the picture will show that it was not the inappropriate use that resulted in the laws against them but rather the prejudicial actions of people who objected (and still object) to this use based on their perception that it conflicted with or offended their religious mores.

The intense activities directed by these groups of people against people who know and use these plants far predates any use by people who use them inappropriately and historically had been weighted most heavily against the traditional user and directed by or lobbied for by various Christian organizations who felt threatened by what they perceived as competition or at least an impediment to conversion. It has never ceased or even diminished save in those few areas where their anti-peyote efforts were legally restricted.

That they responded similarly and excessively when it became apparent that the hated practices had appeared in their own populations is simply an extension of a long standing practice and has far less to do with HOW the plants are used than WHAT is being accessed (i.e. a decidedly pre-Christian spiritual practice) and WHO is using them (namely THEIR children). It is significant that the antipeyote Inquisition Law was not primarily aimed at the native people who were using peyote (they were already under attack) but rather at the invaders (and their descendents) who had begun using peyote.

This was true during the Inquisitions and *it is still true* today. The world would be greatly benefitted from a re-evaluation of these activities as an attempted cultural cleansing motivated by religious beliefs.

It is widely employed as a curative and panaceae.

Often ingested but the physical form is also frequently regarded as a magical charm, fetish or amulet. 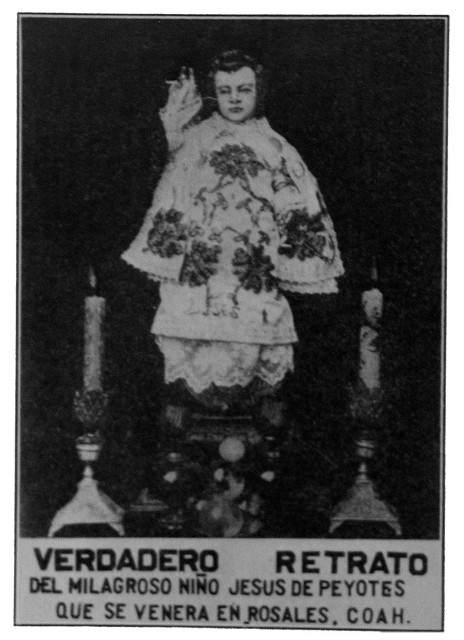 arrow wounds (powdered peyote used to clean and to pack)

Considered a cleansing and healing medicine.

endurance (used by “the auxiliary forces of the conquistadores, in order not to feel fatigue on their marches”)

rubbed on knees to give strength in walking

To rid mind of spells and supernatural dangers

stimulant used during games and races

“tonic aperitif.” (according to Mooney)

witchcraft (to protect against or to dispell)

wounds (packed into; especially if large and open) Applied as dry
powder to deep wounds; poultices are made from green plants.

“…eaten at death-feasts to fortify the living against death”

Peyote buttons are a frequent inclusion in medicine pouches of NAC peyote-ists and anecdotal accounts of their power for health, protection and good fortune are mentioned in many books and papers. I would not be surprised if all peyote people have an abundance of such stories of their own from association with this plant as living beings. Some on retelling seem positively miraculous. 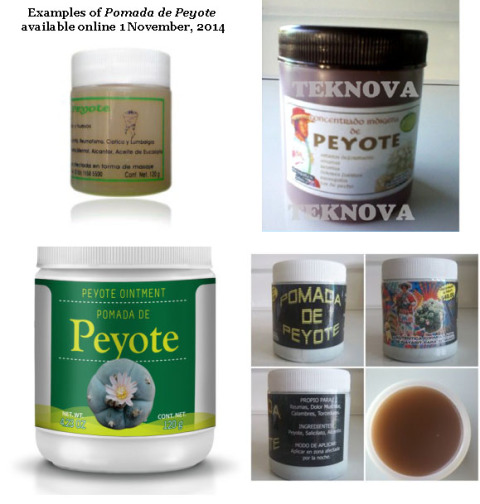 Yarn art at the top of this page was created by Juan Carrillo Carrillo of Nayarit.
It was most kindly shared by Pierre Gambert