Mescaline has been reported to be present in low concentrations. 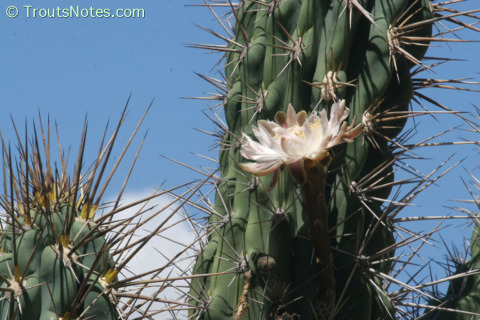 Etymology: Coryne is derived from the Greek word for “Club”.

There is also a variety; Stetsonia coryne var. procera which occurs in mountainous terrain in Dept. Tarija, borders of the Provinces Gran Chaco and O’Connor and Palos Blancos in Bolivia. It has a scattered distribution. 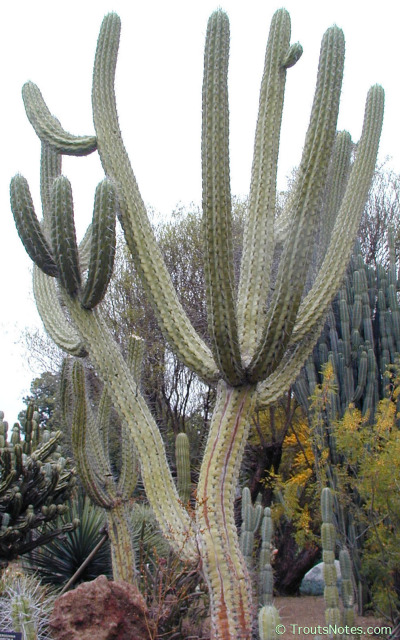 (Describing a plant from the Berlin Botanical Gardens.) 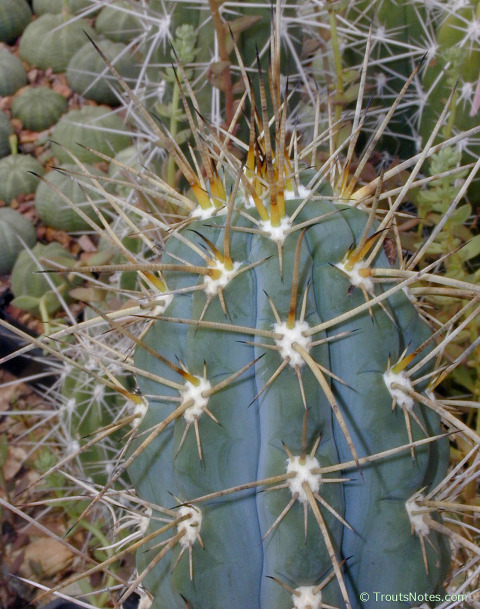 Large and massive tree-like plant which can reach 5 to 8 meters. (& up to 10 feet across) Reti describes them as 3 meters tall and forming literal forests of cacti in the Cordoba Province of northwestern Argentina.

It has a short trunk up to 40 cm in diameter with many grey-blue branches (over 100). The branches have 8 to 9 ribs and can reach 6 cm in length.

7-9 spines, the longest being 5 cm (Can exceed 6 inches according to Anderson 1998). Spines are brownish yellow soon becoming white with black tips.

Plants in cultivation are normally fairly small, single and rather
club shaped unless someplace they can be planted in the ground. The longest spine is black tipped and forms a beautiful contrast to the often dark bluish green skin.

var. procera is said to grow to 10 meters, with a skin that is milky green at first and has pink petals on the flowers. Backeberg 1977: 464. Chemical analysis of the variety has not been reported. 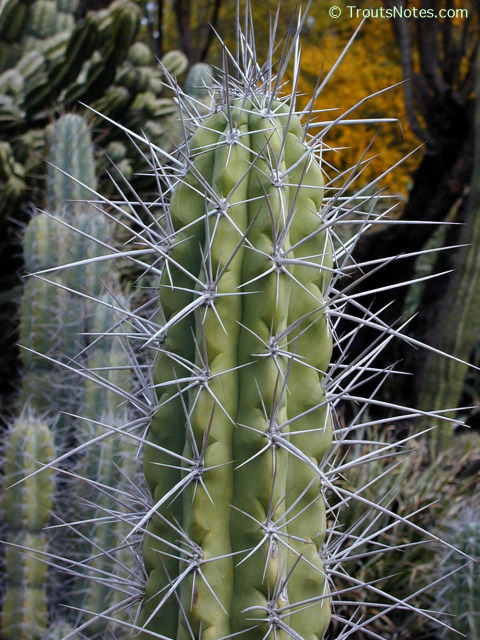 Corynine was reported to be the major alkaloid according to Reti 1950 who said it was isolated in 1% yield by Reti et al. 1935.

(Agurell reported only on primary, secondary and tertiary amines. Coryneine is quaternary so he would not have seen it.

3-Methoxytyramine formed over 50% of the total

N-Methyltyramine was present as 1-10% of the total

Mescaline was present as 1-10% of the total

3,4-Dimethoxyphenethylamine was present as traces.

Anhalonidine was present as traces.

Anhalidine was present as traces.

There is also a strange but useful list in Mata & McLaughlin 1982:

Coryneine (tlc, gc-ms) [?] [This can’t be true as Agurell did not test for quaternary amines. He mentions this as being reported by earlier workers. See note farther below]

Oxycandicine (tlc, gc-ms) [?] [Reti et al. 1935 and Ludueña 1936 refer to it as “3-4-dioxyphényl-éthyl-triméthyl-ammonium” i.e. 3,4-Dihydroxyphenethylamine trimethyl cation which is synonymous with Coryneine, above. They used neither tlc nor gc-ms though. Microchemical methods were the closest tools of the day. [Note 43]] 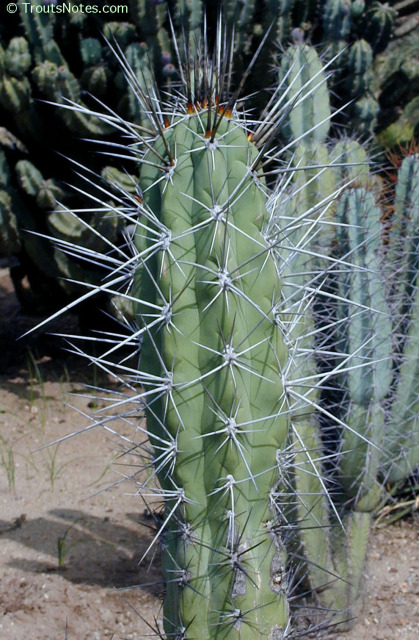 Evidently the decision to analyze Stetsonia coryne for alkaloids
originally came about as a result of noticing that the decomposing
cactus stunk of methylamines.

Reti and coworkers isolated an alkaloid from it, promptly injected it into a dog, evaluated it on isolated tissues and a toad, and after noting the similarity of its effects to candicine decided it was a quaternary amine (I did not make any of that up!). Through pharmacological comparisons and subsequent chemical tests they determined it to be coryneine (which they called oxycandicine). This compound is the betaine of dopamine, i.e. 3,4-dihydroxy-N,N,N-trimethyl-β-phenethylamine.

Miles Anderson 1998 commented that, once large, this species is cold hardy in areas where freezing is mild and brief. It is said to branch more densely and grow “as wide as it is tall” if allowed to experience intense sun and frost while in the ground.
Once it is a larger plant it is said to handle brief periods down to 20°F.  That should not be anticipated to be true for younger specimens.

Stetsonia coryne is readily available as very choice specimens but it can be rather slow growing, cold sensitive if lacking adequate drainage or when growing in a container rather than being planted in the earth, and the species is prone to developing an orange basal rotting following overwatering.

Olmos 1977 has a color picture of a young plant on page 137. It is easy to understand why these beautiful plants are so popular with collectors. 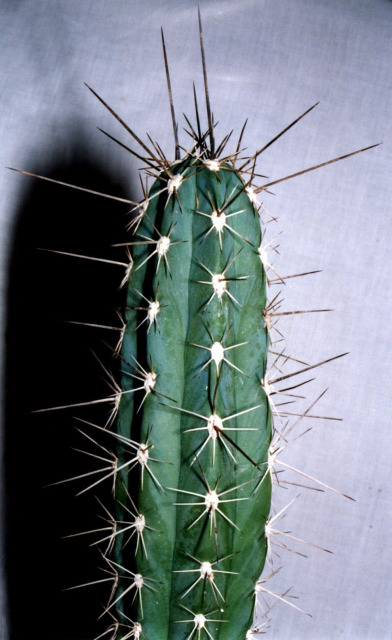