At most this is a form rather than a variety. The word “Hort.” indicates it is a cultivar which removes it from the interest of most botanists. 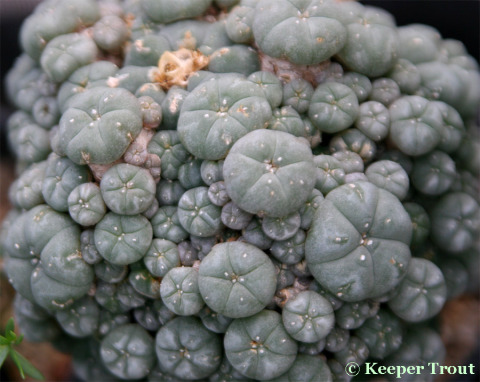 The name caespitosa and the accompanying analytical reports need to be regarded with some caution. “caespitosa” is not really a variety or a species but is a growth form that can be exhibited by several of the peyote species. Multiple headed growth often results following decapitation and is also the norm in grafted plants but caespitose individuals can be found in almost any intact healthy peyote population. They are capable of forming large mounds, up to a meter across according to Anderson, that are commonly referred to as “planchas“.

There is something that is present in horticulture which does not always require decapitation for multiple pupping but they are often propagated through grafting. There are multiple forms of these “caespitosa” in horticulture so care should be taken not to automatically equate them with each other without adequate additional information. It is also not to confuse these with the pupping induced by grafting.

A large crown surrounded by smaller ones is common but one clone in particular offsets vigorously with many small 5-ribbed crowns that stay fairly small and has a form that suggests it may be some type of a densely clustering semi-monstrose (the pupping reminds me somewhat of that of Mammillaria bocasana cv. Fred).

There are an unclear number of horticultural offerings but it is clear there are at least several that are distinct from each other. What has been tested by Habermann and by Štarha and by Fujita were all horticultural and they do not all appear to have been the same plants despite bearing the same name. Štarha and Habermann may have tested the same offering but it appears Fujita did not as his plant was found not to contain mescaline. Fujita included a photograph but Štarha and Habermann did not unless it was in a paper that I have not yet accessed.

The plants analyzed in Fujita et al. 1972 appear to be either grafted plants or they include a comparative photographs of the parent stock with a fat grafted clump.

The mother plant they show (ungrafted) has diffuse fleshy short roots such as are often seen on rooted cuttings. I have to wonder if it was collected as a cut plant and then rooted or if it originated from grafted plants which were then rooted.

Both specimens show the bloating often seen in grafted plants, and also often in older specimens of well watered L. diffusa, but they did not appear to be L. diffusa.

Var. caespitosa is rejected by Anderson 1980 as an epithet in reference to multiple heading characteristics of some types of L. williamsii. 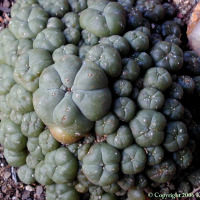 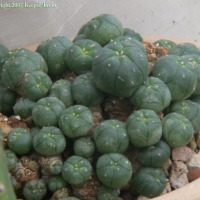 Another analysis of a plant bearing this name was published (in Japanese) by Fujita et al. 1972.  [Note 25]

They reported four new alkaloids (and five familiar ones):

All % by fresh wt. They did not detect mescaline suggesting this caespitosa might be derived from another Lophophora species.
Fujita analyzed plants grown in Japan.
They unfortunately assigned the previously used name Peyotine to one of their new molecules!

This was only partially translated from the Japanese (through the kind help of J.Hanna and friends).

They were using Cereus pitajaya DC. as the stock for the graft photographed. They also listed the names Cereus pruinosus Otto and Cereus tortuosus Forbes in the text. I assume in reference to other common choices of preferred grafting stock?

Above shows a 45-year old plant of Lophophora williamsii  “caespitosa”;
cultivated in Germany (Both photos are copyrighted by Evil Genius) 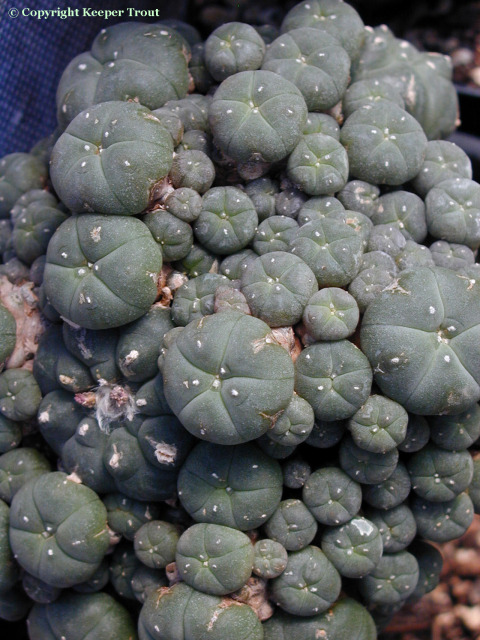 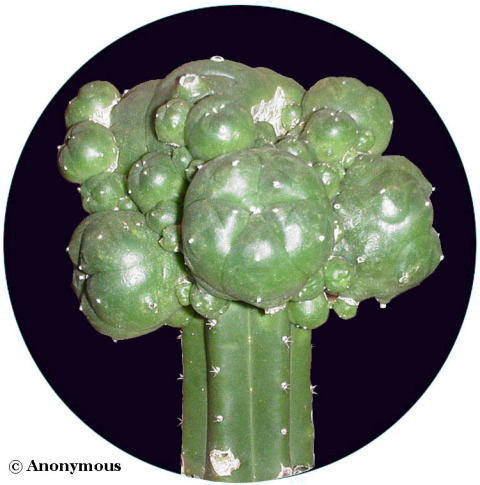 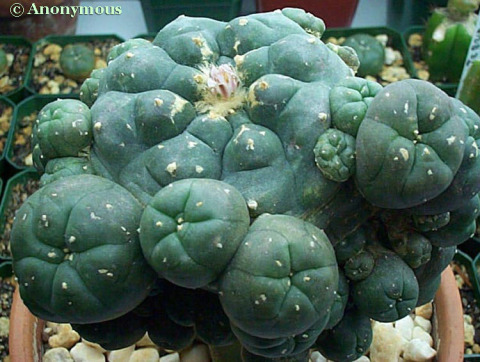 Caespitose individuals of Lophophora williamsii commonly occur in the South Texas populations; if they are not harvested. 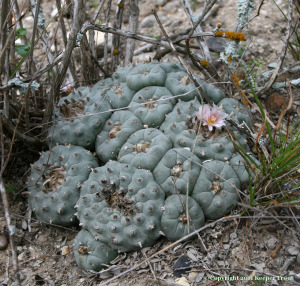 A  “plancha” in the South Texas Peyote Gardens 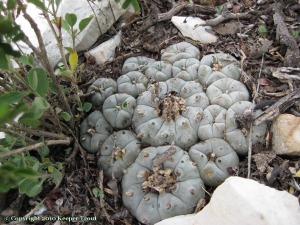 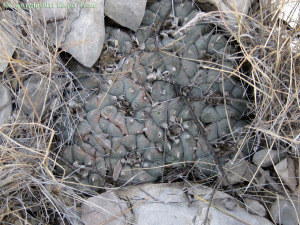 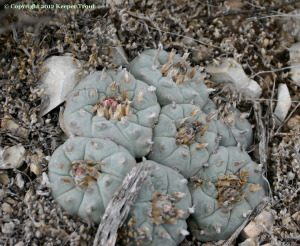 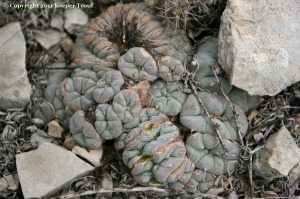