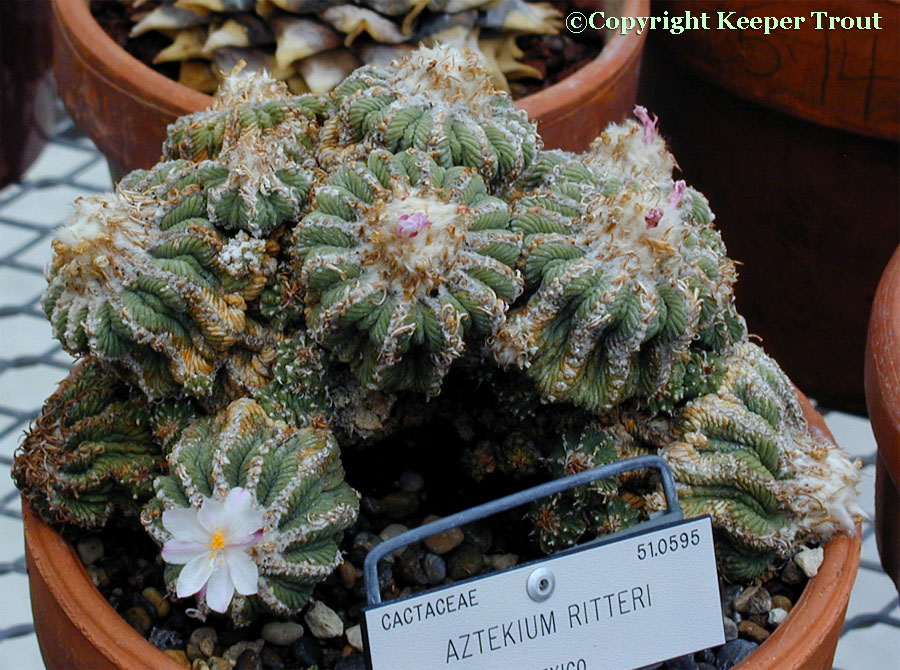 Small amounts of mescaline have been reported.

Etymology: The wonderful texture of its surface has been likened to some Aztec motifs, hence the genus name Aztekium. Friedrich Ritter (who had been living in Mexico) was the specific namesake.

Often remains solitary but may be freely offsetting from base with age (or if grafted or after exposure to pesticides & fungicides).
Greyish-green to grey body is broad and rounded to around 2 inches in
diameter; with a depressed wooly top.
Short napiform taproot.
9-11 ribs, [Ed.: Sometimes swirling] folded, with subsidiary and narrower ribs in between.]
Cultivated plants tend to be more green. Especially so on grafted plants. This is considered a detractant to the beauty of this plant by most authorities and serious collectors.
Areoles are closely set and bear white hairs.
Few spines; weak, bent or contorted. Usually 1-3; 3-4 mm in length.
White flowers 8 mm in diameter, appearing to have a stalk.
[Pizetti describes flowers as being about 1 cm wide; with white segments and outer perianth parts with pink edges. Anderson 1998 describes the flowers as white to light pink and appearing sporadically throughout the summer.]
Pink fruit is berrylike and appears only when ripe.
Black seeds are 0.5 mm long.
Backeberg 1977: 79-80 and
Pizetti 1985 entry #15.

Backeberg & Pizetti (& many others) describe the species as cold sensitive but I have seen them tolerate hard freezes (6°F) in a covered but unheated outdoor cactus bed Austin Texas when totally dry. I would recommend protection from freezing despite that lucky experience.

Once considered an endangered species due to being found only in a restricted area experiencing heavy collection activity. More populations across a broad range have since been discovered. The habitat includes inaccessible populations due to restricted access for both humans and browsers so it has been downgraded to become listed as a species of “Least Concern“.
B. Fitz Maurice & W.A. Fitz Maurice 2013. Aztekium ritteri. The IUCN Red List of Threatened Species. Version 2014.2. www.iucnredlist.org.

[Aztekium ritteri has had an unconfirmed claim of caffeine. No reference was cited and none has been located. Claims for caffeine have never been sustantiated in any cactus species.] 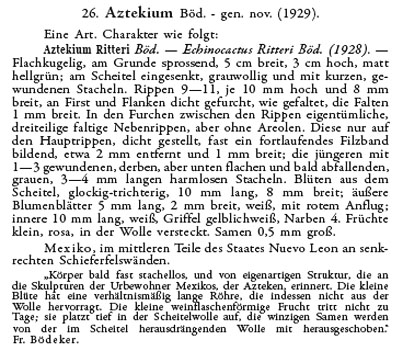